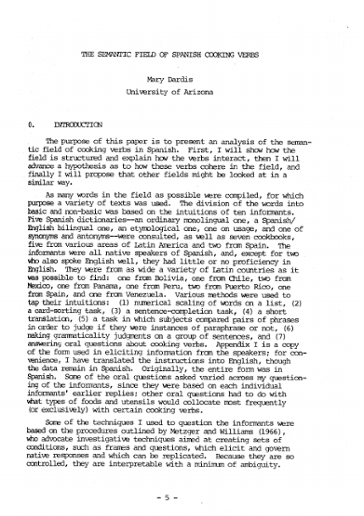 The purpose of this paper is to present an analysis of the semantic field of cooking verbs in Spanish. First, I will show how the field is structured and explain how the verbs interact, then I will advance a hypothesis as to how these verbs cohere in the field, and finally I will propose that other fields might be looked at in a similar way. As many words in the field as possible were compiled, for which purpose a variety of texts was used. The division of the words into basic and non basic was based on the intuitions of ten informants. Five Spanish dictionaries--an ordinary monolingual one, a Spanish/ English bilingual one, an etymological one, one on usage, and one of synonyms and antonyms--were consulted, as well as seven cookbooks, five from various areas of Latin America and two from Spain. The informants were all native speakers of Spanish, and, except for two who also spoke English well, they had little or no proficiency in English. They were from as wide a variety of Latin countries as it was possible to find: one from Bolivia, one from Chile, two from Mexico, one from Panama, one from Peru, two from Puerto Rico, one from Spain, and one from Venezuela. Various methods were used to tap their intuitions: (1) numerical scaling of words on a list, (2) a card- sorting task, (3) a sentence-completion task, (4) a short translation, (5) a task in which subjects compared pairs of phrases in order to judge if they were instances of paraphrase or not, (6) making grammaticality judgments on a group of sentences, and (7) answering oral questions about cooking verbs. Appendix I is a copy of the form used in eliciting information from the speakers; for convenience, I have translated the instructions into English, though the data remain in Spanish. Originally, the entire form was in Spanish. Some of the oral questions asked varied across my questioning of the informants, since they were based on each individual informants' earlier replies; other oral questions had to do with what types of foods and utensils would collocate most frequently (or exclusively) with certain cooking verbs. Some of the techniques I used to question the informants were based on the procedures outlined by Metzger and Williams (1966), who advocate investigative techniques aimed at creating sets of conditions, such as frames and questions, which elicit and govern native responses and which can be replicated. Because they are so controlled, they are interpretable with a minimum of ambiguity. The combined use of texts and informants is in line with the principles of linguistic methodology outlined by Labov (1972, 1974), who concludes that data elicited from a variety of sources and methods has higher validity than the "intuitions of the theorist himself" (Labov 1972:106). Different methods "can be mutually confirming" (Labov, 1972:118). I believe that is right. In this paper, for example, had I used only my own intuitions as a native speaker, my conclusions would have been limited to my own dialect and would have excluded dialectal differences in meaning, transitivity, and word equivalence. Many facets of language operate in dialectal and cross -dialectal structures, and the researcher who uses only his/ her own dialect as evidence is, at best, overlooking a wealth of data and information, and, at worst, developing an incomplete theory. A word about word: in this paper, I will use it to mean either one single lexical item or a paraphrastic expression. As will be seen, several cooking words in Spanish are not single words, but, in a semantic field analysis, must be treated as if they were.