Cues and Miscues: A Study of How Readers Assign Pronoun Reference 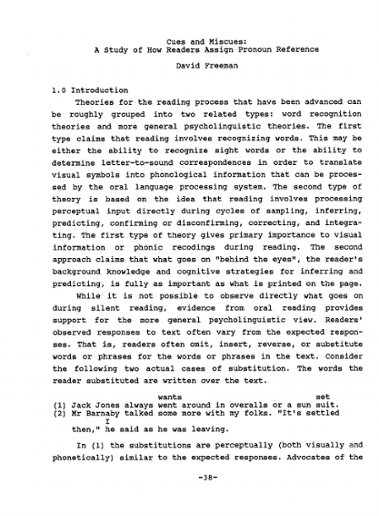 Published as Coyote Papers: Working Papers in Linguistics from A-Z

Theories for the reading process that have been advanced can be roughly grouped into two related types: word recognition theories and more general psycholinguistic theories. The first type claims that reading involves recognizing words. This may be either the ability to recognize sight words or the ability to determine letter -to -sound correspondences in order to translate visual symbols into phonological information that can be processed by the oral language processing system. The second type of theory is based on the idea that reading involves processing perceptual input directly during cycles of sampling, inferring, predicting, confirming or disconfirming, correcting, and integrating. The first type of theory gives primary importance to visual information or phonic recordings during reading. The second approach claims that what goes on "behind the eyes ", the reader's background knowledge and cognitive strategies for inferring and predicting, is fully as important as what is printed on the page. While it is not possible to observe directly what goes on during silent reading, evidence from oral reading provides support for the more general psycholinguistic view. Readers' observed responses to text often vary from the expected responses. That is, readers often omit, insert, reverse, or substitute words or phrases for the words or phrases in the text. Consider the following two actual cases of substitution. The words the reader substituted are written over the text. (1) Jack Jones always went (wants) around in overalls or a sun suit (set). (2) Mr Barnaby talked some more with my folks. "It's settled I then," he (I) said as he was leaving. In (1) the substitutions are perceptually (both visually and phonetically) similar to the expected responses. Advocates of the word recognition approach could account for the substitutions by claiming that the reader did not look carefully enough at the printed symbols or by saying that the reader confused similar symbols. That is, the reader made mistakes in recognizing or in sounding out these words. In contrast those theorists working within a psycholinguistic framework would claim that the reader made use of syntactic, semantic, grapho-phonic, and pragmatic knowledge during the reading. The first substitution is of a verb for a verb, and the second is a noun for a noun. Thus, the reader used syntactic knowledge. The use of syntactic cues is especially evident in the fact that "wants" is properly inflected to agree with the subject. In addition, the reader used semantic knowledge, knowledge that "sun" and "set" frequently cooccur. Finally, the reader used grapho-phonic knowledge (knowledge of either graphemes or phonemes or a combination of the two) because the expected and observed responses look and sound alike. However, the reader made some incorrect predictions and attended more at times to perceptual cues than to the meaning of the sentence. Both theories, then, can offer some explanation for (1). But what about (2)? What does a word recognition theory of reading have to say about the substitution of "I" for "he "? There is no graphemic or phonological similarity here. Furthermore, these are short, frequently occuring words that the reader (in this case a sixth-grader) should have been expected to have mastered. In short, the word recognition theory of reading has nothing to say about cases like (2). On the other hand, the psycholinguistic theory can offer an explanation. For one thing, the reader used syntactic knowledge at the point of substituting "I" for "he" since both the expected response and the observed response are pronouns in subject position marked for nominative case. The reader's syntactic knowledge enabled him to predict correctly that a nominative pronoun would occur. In addition, since both words here are personal pronouns, there is a semantic similarity between the expected and observed responses. Furthermore, the reader used pragmatic cues to infer pronoun reference. The pronoun occurs as a dialog carrier, and the reader predicted that the unnamed narrator in this first-person narration would speak these lines. The reader appears to have used the earlier possessive pronoun "my" as a cue for pronoun reference rather than the proper noun "Mr Barnaby ". Thus, the reader used syntactic, semantic, and pragmatic cues to make his prediction, and these non-perceptual cues overcame the grapho-phonic cues in the text. As a result, there was a variation between his observed response and the expected response. Since only the psycholinguistic theory of reading can account for the substitution in the second sentence, it is to be preferred to a word recognition theory of reading.