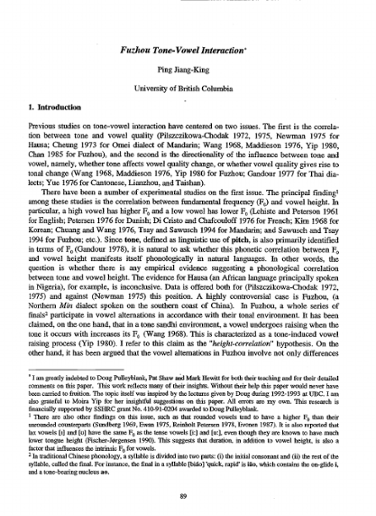 Previous studies on tone-vowel interaction have centered on two issues. The first is the correlation between tone and vowel quality (Pilszczikowa-Chodak 1972, 1975, Newman 1975 for Hausa; Cheung 1973 for Omei dialect of Mandarin; Wang 1968, Maddieson 1976, Yip 1980, Chan 1985 for Fuzhou), and the second is the directionality of the influence between tone and vowel, namely, whether tone affects vowel quality change, or whether vowel quality gives rise to tonal change (Wang 1968, Maddieson 1976, Yip 1980 for Fuzhou; Gandour 1977 for Thai dialects; Yue 1976 for Cantonese, Lianzhou, and Taishan). There have been a number of experimental studies on the first issue. The principal finding among these studies is the correlation between fundamental frequency (F₀) and vowel height. In particular, a high vowel has higher F₀ and a low vowel has lower F₀ (Lehiste and Peterson 1961 for English; Petersen 1976 for Danish; Di Cristo and Chafcouloff 1976 for French; Kim 1968 for Korean; Chuang and Wang 1976, Tsay and Sawusch 1994 for Mandarin; and Sawusch and Tsay 1994 for Fuzhou; etc.). Since tone, defined as linguistic use of pitch, is also primarily identified in terms of F₀ (Gandour 1978), it is natural to ask whether this phonetic correlation between F0 and vowel height manifests itself phonologically in natural languages. In other words, the question is whether there is any empirical evidence suggesting a phonological correlation between tone and vowel height. The evidence for Hausa (an African language principally spoken in Nigeria), for example, is inconclusive. Data is offered both for (Pilszczikowa-Chodak 1972, 1975) and against (Newman 1975) this position. A highly controversial case is Fuzhou, (a Northern Min dialect spoken on the southern coast of China). In Fuzhou, a whole series of finals participate in vowel alternations in accordance with their tonal environment. It has been claimed, on the one hand, that in a tone sandhi environment, a vowel undergoes raising when the tone it occurs with increases its F₀ (Wang 1968). This is characterized as a tone -induced vowel raising process (Yip 1980). I refer to this claim as the "height-correlation" hypothesis. On the other hand, it has been argued that the vowel alternations in Fuzhou involve not only differences in height, but also differences along other dimensions, such as a front/back axis, monophthongs versus diphthongs, etc. (Maddieson 1976, Chan 1985). The "height- correlation" hypothesis, therefore, is not sufficient to explain all instances of tone -related vowel alternation. The implicit assumption behind this debate is that tonal features and vocalic features may interact directly. This yields a more fundamental question as to the nature of this interaction. In other words, whether the interaction between tone and vowels is direct (i.e. feature -to- feature) or indirect (i.e. mediated by something else). Although studies of the second issue are relatively rare, it has been shown that the influence of tones and vowels on each other is bi- directional cross -linguistically. For example, whereas Mandarin and Fuzhou have been cited as cases in which vowel alternations are conditioned by tonal environment (Wang 1969, Wang 1968, Yip 1980), the Yue dialects of Chinese, such as Cantonese, Taishan, and Lianzhou, illustrate the opposite direction of influence (Yue 1976). In Cantonese, for instance, the Yin "entering" tone historically splits into two tones according to their vocalic environment. It is realized with a higher register when the vowel is lax and short, and with a lower register when the vowel is tense and long (Yue 1976:49). A general question that relates to the first issue, then, is whether tone and vowel quality directly influence each other or whether this influence between them is mediated by something else. This article provides a unified account for all vowel distribution and alternation patterns corresponding to tonal environments in Fuzhou, focusing on the prosodic anchor mediating between tones and vowels. Tones and vowels will be claimed not to interact directly (i.e., feature -tofeature), and it will be seen that there is no height correlation between them. Instead, tone -vowel interaction in Fuzhou must be mediated by a prosodic anchor; in this case, the mora; and distinct moraic structures (monomoraic/bimoraic) required by the prelinking of the lexically specified number of tonal roots are what trigger the vowel alternations. The analysis is formulated within the constraint -based grammar of Optimality Theory (OT) (McCarthy and Prince 1993a, b; Prince and Smolensky 1993; Pulleyblank 1994, among others). Contrary to the rule -based approach, OT assumes that Universal Grammar (UG) contains two types of phonological representation: the input and the output. The function Gen freely generates a set of output candidates for each input. UG also contains a set of violable constraints that are ranked on a language- particular basis. The function Eval determines the optimal output, which either satisfies the higher ranked constraints, or has the least violations of the relevant constraints.