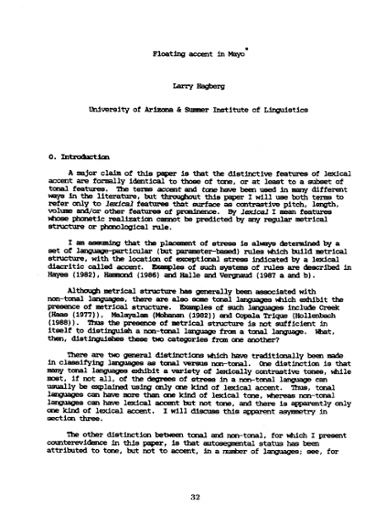 A major claim of this paper is that the distinctive features of lexical accent are formally identical to those of tone, or at least to a subset of tonal features. The terms accent and tone have been used in many different ways in the literature, but throughout this paper I will use both terms to refer only to lexical features that surface as contrastive pitch, length, volume and/or other features of prominence. By lexical I mean features those phonetic realization cannot be predicted by any regular metrical structure or phonological rule. I am assuming that the placement of stress is always determined by a set of language- particular (but parameter - based) rules which build metrical structure, with the location of exceptional stress indicated by a lexical diacritic called accent. Examples of such systems of rules are described in Hayes (1982), Hammond (1986) and Halle and Vergnaud (1987 a and b). Although metrical structure has generally been associated with non-tonal languages, there are also some tonal languages which exhibit the presence of metrical structure. Examples of such languages include Creek (Haas (1977)), Malayalam (Mohanan (1982)) and Capella Trique (Hollenbach (1988)). Thus the presence of metrical structure is not sufficient in itself to distinguish a non-tonal language from a tonal language. What, then, distinguishes these two categories from one another? There are two general distinctions which have traditionally been made in classifying languages as tonal versus non-tonal. One distinction is that many tonal languages exhibit a variety of lexically contrastive tones, while mast, if not all, of the degrees of stress in a non-tonal language can usually be explained using only one kind of lexical accent. Thus, tonal languages can have more than one kind of lexical tone, whereas non -tonal languages can have lexical accent but not tone, and there is apparently only one kind of lexical accent. I will discuss this apparent asymmetry in section three. The other distinction between tonal and non-tonal, for which I present counterevidence in this paper, is that autosegmental status has been attributed to tone, but not to accent, in a number of languages; see, for example, Goldsmith (1976), Williams (1976) and Pulleyblank (1983). For all such languages, the Universal Association Convention (UAC) (Goldsmith (1976)) predicts the location of most tones, with the remaining tones accounted for by lexical pre- linking. From an examination of the literature it appears, then, that the main distinction between the terms tonal and non-tonal is that tonal languages have lexical tone while non-tonal languages have lexical accent. Formally, both of these devices are lexical diacritics, but they appear to differ in that tone can be an autosegment, while no such status has ever been claimed for accent. Therefore, the question to be addressed in this paper is this: Can an accentual diacritic have autosegmental status? Using data from Mayo, a Uto-Aztecan language of northwestern Mexico, I will show that the answer is yes. The implication, then, is that accent is formally the same as tone, or at least the same as one variety of tone. A significant claim follows from this. If accent is formally the same as a tone, then no language can exist in which lexical accent occurs independently of all tonal features. As far as I know, no such language has been shown to exist. The paper is organized as follows. Section one presents the data and provides two possible analyses of Mayo stress using the theory of Halle and Vergnaud (1987 a and b) (henceforth H&V). I show that Mayo has lexical accent which floats in underlying representation (UR), just like an autosegmental tone. Section two demonstrates that stress assignment crucially has to precede and follow reduplication, thus indicating that the rules of stress assignment are cyclic and that lexical accent refloats at the end of each cycle. In section three I explore the theoretical implications of this analysis and propose that accent is formally the same as tone.