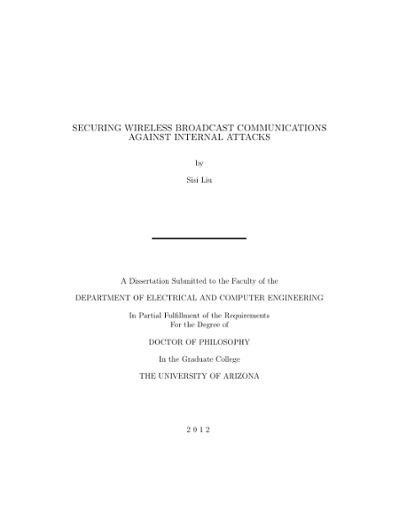 The pervasiveness of wireless communications in modern society is unprecedent. Using numerous wireless technologies, including cellular, WiFi, WiMax and others, users gain ubiquitous access to a wealth of information services relevant to their everyday lives. These include communication services (voice, email, text), commercial transactions (e-banking, e-trading), location-based services (points of interest, navigation), social networking, web access, and others. Further proliferation of mobile services and applications provided via wireless communications is contingent upon the network's reliability and security. As this wireless revolution continues to unfold, users have grown increasingly concerned with the amount of sensitive information that leaks to unauthorized parties. They have also become more skeptical to the abilities of current technologies in providing a reliable and secure environment. The problem of ensuring network reliability and security is particularly challenging in the wireless domain. The open nature of the wireless medium leaves it accessible to any device equipped with a transceiver. Wireless networks remain vulnerable to numerous attacks, including eavesdropping, packet modification and injection, replay, impersonation, and jamming. Moreover, the poor physical security of the majority of wireless stations (mobile devices, sensor, etc.) makes them susceptible to physical compromise. Such compromised devices become a launchpad for internal attacks from adversaries with intimate knowledge of network secrets and protocol specifications. Internal attacks are much harder to counter than external ones since the adversary can bypass typical cryptographic methods that authorize user access. In this dissertation, we investigate attacks on wireless communications launched by internal adversaries. In particular, we are concerned with sophisticated intentional interference (jamming) attacks against broadcast communications. Such attacks have been shown to be detrimental to network operation. We further consider the problem of distributed node coordination in dynamic spectrum networks. To address these problems, we design novel communication protocols that protect broadcast communications from internal attacks via a combination of randomization, redundancy and cryptographic techniques. We propose new security metrics to quantify the ability of the adversary to deny access to the broadcast channel. We introduce a randomized distributed scheme that allows nodes to establish and maintain the broadcast channel in the presence of the jammer. Also this scheme uniquely identifies the set of compromised nodes, both when nodes are acting independently and when they are colluding. To protect broadcast communication performed on control channel, we propose a secure broadcast scheme called TDBS, which implements the broadcast operation as a series of unicast transmissions, distributed in frequency and time. Finally, we address the problem of dynamically assigning the control channel in CRNs based on time- and space-varying spectrum opportunities. We propose a cluster-based architecture that allocates different channels for control at various clusters in the network. The clustering problem is formulated as a bipartite graph problem, for which we develop a class of algorithms to implement. Extensive simulations are conducted to verify the validity of the proposed mechanisms.