An Assessment of Abundance, Diet, and Cultural Significance of Mexican Gray Wolves in Arizona 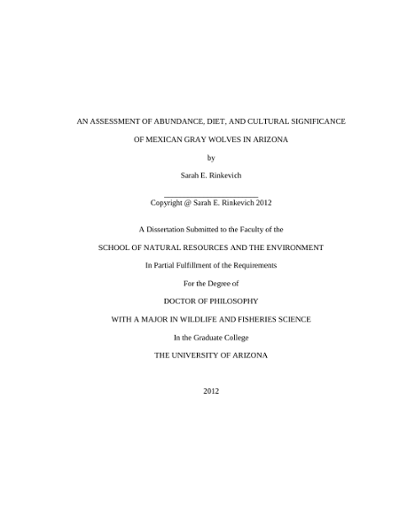 I sampled the eastern portion of the Fort Apache Indian Reservation from June 19 to August 8 in 2008 and from May 6 to June 19 in 2009. I used scat detection dogs to find wolf (Canis lupus baileyi) scat on the Fort Apache Indian Reservation during 2008 and 2009. My population size estimate of the wolf population was 19 individuals (95% CI = 14 - 58; SE = 8.30) during 2008 and 2009. My study also used DNA analyses to obtain an accurate assessment of Mexican wolf diet and, compare prey remains in Mexican gray wolf scat with prey remains in two other sympatric carnivore species (coyote, C. latrans, and puma, Puma concolor). Percent biomass of prey items consumed by Mexican wolves included 89% for elk, 8% for mule deer, and 3% for coyote. Percent biomass of prey items consumed by pumas was 80% for elk, 12% for mule deer, 4% for turkey, and 4% for fox. I included an ethnographic feature to my research. My study showed evidence of shared knowledge about the wolf within Western Apache culture. My data fit the consensus model based upon the large ratio between the first and second eigenvalues. I provided a literature review of how traditional ecological knowledge has enhanced the field of conservation biology but also the challenges of collecting and incorporating it with western science. Lastly, I provide an historical perspective of wolves throughout Arizona, an assessment of their historical abundance, and document a possible mesocarnivore release. Between 1917 and 1964, 506 wolves, 117,601 coyotes, 2,608 mountain lions, 1,327 bears, 19,797 bobcats, and 21 jaguars were killed by PARC agents, bounty hunters, and ranchers as reported in U.S. Bureau of Biological Survey Annual Reports in Arizona. The relationship between the numbers of coyotes and wolves destroyed was investigated using Pearson correlation coefficient. There was a negative correlation between the numbers of wolves and coyotes destroyed in Arizona between 1917 and 1964 (r = -0.40; N = 46; p = 0.01) suggesting a possible mesopredator release of coyotes with the extirpation of the wolf in Arizona.