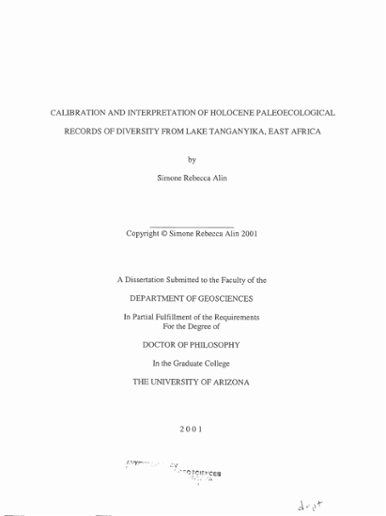 Lake Tanganyika is a complex, tropical ecosystem in East Africa, harboring an estimated 2,100 species. Extensive watershed deforestation threatens the biodiversity and ecological integrity of the lake. In this dissertation, ecological and paleoecological methods were employed to study the distribution of invertebrate biodiversity through space and time, with particular emphasis on linkages between biodiversity and land –use patterns. Ecological surveys of fish, mollusc, and ostracod crustacean diversity at sites in northern Lake Tanganyika representing different levels of watershed disturbance revealed a negative correlation between biodiversity and intensity of watershed disturbance. To elucidate the long -term relationship between disturbance and biodiversity, paleoecological records of invertebrates offshore from watersheds experiencing different degrees of anthropogenic disturbance were examined. Life, death, and fossil assemblages of ostracod valves were compared to assess the reliability and natural variability inherent to the paleoecological record. These comparisons indicated that paleoecological (i.e. death and fossil) assemblages reliably preserve information on species richness, abundance, and occurrence frequency at comparable -to- annual resolution. Unlike life assemblages, species composition of paleoecological assemblages reflects input of species from multiple habitat types. Ostracod paleoecological assemblages are characterized by spatiotemporal averaging that renders them representative of larger areas and longer time spans than life assemblages. Thus, paleoecological assemblages provide an efficient means of characterizing longer -term, site -average conditions. Natural variability in ostracod fossil assemblages from a sediment core representing the Late Glacial to the present indicates that abundance of individual ostracod species is highly variable. Ostracod assemblages were preserved in only the most recent 2,500 years of sediment. Species composition of ostracod assemblages reflects lake water depth. Core geochemical data indicate that the coring site may have been below the oxycline for ~2,000 years, inhibiting ostracod survival and preservation. Paleoecological, sedimentological, and stable isotope data revealed differences in biodiversity and watershed disturbance through time offshore from a pair of sites. The protected site is offshore from Gombe Stream National Park (Tanzania), the other offshore from a deforested watershed outside the park. Offshore from the deforested watershed, sedimentation rates increased, and turnover in ostracod species composition occurred during the past 50 years. Comparable changes were not observed offshore from the park.