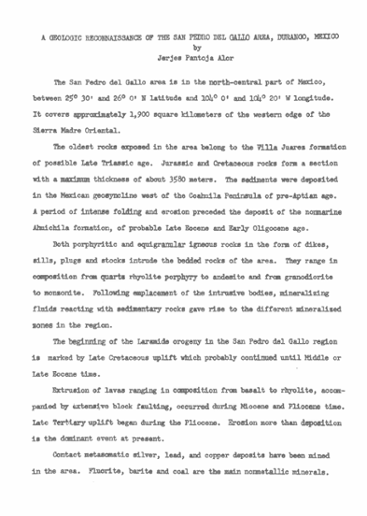 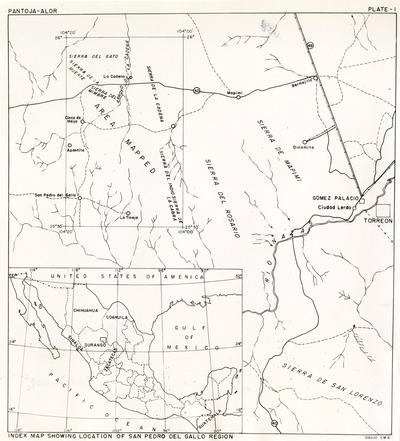 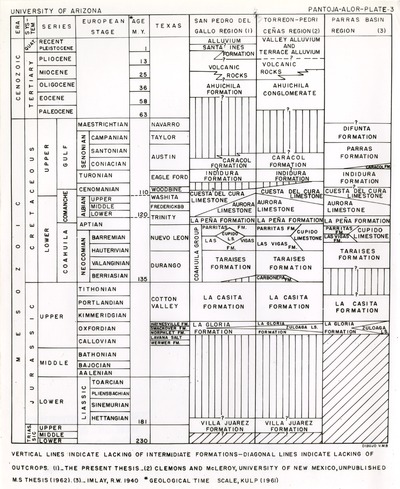 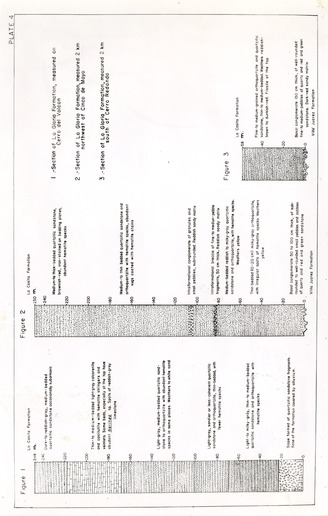 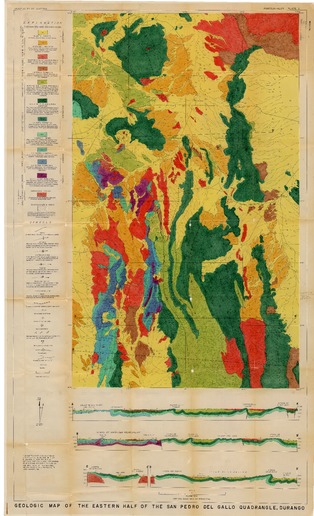 The San Pedro del Gallo area 1.8 in the north-central part of Mexico, between 25°30' and 26°00' N latitude, and 104°00' and 104°20' W longitude. It covers approximately 1,900 square kilometers at the western edge of the Sierra Madre Oriental. The oldest rocks exposed in the area belong to the Villa Juarez Formation of possible Late Triassic age. These rocks, of continental origin, comprise siltstone, sandstone, conglomerate, tuff, and intercalated lavas of characteristic red color. Jurassic and Cretaceous rocks form a section with a maximum thickness of about 3,580 m. The sediments were deposited in the Mexican Geosyncline, west of the Coahuila Peninsula of pre-Aptian age. The Villa Juarez Formation is overlain with angular unconformity by orthoquartzite, quartzose sandstone, and limestone lenses of the La Gloria Formation of Oxfordian age. The La Casita Formation, which is stratigraphically above the La Gloria Formation, probably ranges in age from late Oxfordian to early Neocomian. It consists of thin-bedded limestone, black shale, and varicolored sandstone, with intercalations of coal seams and abundant ammonites. The Lower Cretaceous rocks of the area comprise the Coahuila Series, La Pena Formation, Aurora Limestone, and Cuesta del Cura Formation. Neocomian and upper Aptian rocks are represented by thin-bedded limestone, marl, and shale of the Taraises, Las Vigas, Parritas, and La Pena Formations. This sequence of rocks is overlain with apparent conformity by the medium- to thick-bedded bank-type Aurora Limestone of middle to late Albian age. A notable change of facies occurs laterally in the upper Albian and lower Cenomanian rocks, the lithology of the Aurora Limestone grading westward into the thin-bedded limestone with wavy bedding planes and black chert intercalations that characterize the Cuesta del Cura Formation. An erosional unconformity developed on the surface of the Aurora Limestone and Cuesta del Cura Formation is covered by the Indidura and Caracol Formations of Turonian to Coniacian age. These consist or thin-bedded, platy limestone, shale, and marl beds, which grade upward into a thick sequence of poorly fossiliferous calcareous sandstone, siltstone, and shale. A period of intense folding and erosion preceded the deposit of the non-marine Ahuichila Formation, of probable late Eocene and early Oligocene age. This formation was deposited with marked angular unconformity on all the older rocks, including the Villa Juarez Formation. Both, porphyritic and equigranular igneous rocks in the form of dikes, sills, plugs, and stocks intrude the bedded rocks of the area. They range in composition from quartz rhyolite porphyry to andesite and from granadiorite to monzonite. The rocks around the intrusive bodies have been metamorphosed irregularly as far as 100 m from the igneous contacts. Irregular tactite aureoles occur around intrusive bodies in the Descubridora district, west of Cerritos de Los Victorinos, and in the Sierra del Mimbre. Marble and recrystallized limestone is found west of Descubridora and in the Bajio del Bailon, and hornfels has formed in Cerrito de La Cruz and Cerrito de Las Liebres near San Pedro del Gallo, as well as in the southern part of the Sierra del Mimbre. Folowing emplacement of the intrusive bodies mineralizing solutions reacting with sedimentary rocks gave origin to the different mineralized zones in the region. The beginning of the Laramide Orogeny in the San Pedro del Gallo region is marked by Late Cretaceous uplift, which probably continued until middle or late Eocene time. Compressive forces acting in an east-west to northeast-southwest direction folded the Mesozoic strata into a series of narrow asymmetrical anticlines and synclines overturned to the east, with axial, planes almost parallel to the borders of the Coahuila Peninsula. Thrusting and faulting were important in the vicinity of San Pedro del Gallo. There is no conclusive evidence of large-scale post-Triassic and pre-Laramide deformation in the area. Extrusion of lavas ranging in composition from basalt to rhyolite, accompanied by extensive block faulting, occurred during Miocene and Pliocene time. Late Tertiary uplift began during the Pliocene. The streams were rejuvenated and there was increased erosion, which caused, together with a change of climate, the overloading of some streams and local blocking of drainage by alluvial fans in the valleys, giving rise to the Santa Ines Formation. Erosion, more than deposition is the dominant event at present. Contact metasomatic silver, lead, and copper deposits in the Aurora Limestone have been mined in the Descubridora, Parranderas , and Sierra del Mimbre districts. Fluorite and barite have been extracted from veins in the La Gloria Formation and the Aurora Limestone. Thin beds and seams of coal in the La Casita Formation were mined within the town limits of San Pedro del Gallo. No important mining activity exists at present in the area studied. The area has never been tested for oil.