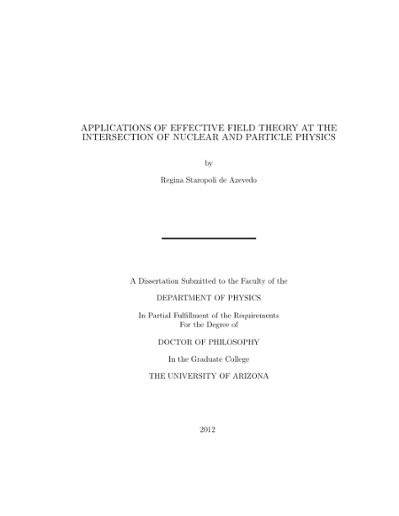 We apply effective field theory (EFT) techniques to solve problems at the intersection of nuclear and particle physics. In particular, we study three problems that span different energy scales. First, we probe scattering processes, like ππ scattering and e⁺e⁻ annihilation into pions, around the rho mass, m(p) ≃ 770 MeV, which is comparable to the characteristic QCD scale, M(QCD) ∼ 1 GeV. Second, we analyze the nucleon-nucleon potential, especially the renormalization of its binding energy, whose momentum scale, κ ∼ 45 MeV, is much smaller than the pion mass, m(π) ≃ 140 MeV, which in turn is much smaller than M(QCD). Finally, we address a decay problem of a bottomonium into charmed mesons covering two different scales larger than M(QCD), the bottom mass m(b) ∼ 4.5 GeV and the charm mass m(c) ∼ 1.5 GeV V. At energies comparable to M(QCD), rho mesons with masses parametrically comparable to the pion masses are incorporated in a controlled low-energy EFT of QCD, with the assumption that the latter has a dynamical "vector symmetry". We enlarge the "Vector EFT" of pions and rhos to include electromagnetic gauge invariance, and the connections to vector-meson-dominance models are discussed. We develop a power counting for reactions at energies near the rho mass, which requires selective resummations of the momentum expansion. We calculate the amplitudes for ππ → ππ and e⁺e⁻ → π⁺π⁻ in leading order and compare them with data. At lower energies, we use an EFT with momentum of the order of the mass of the pion, Chiral Perturbation Theory (ChPT), to develop a framework to study the renormalization of the two-nucleon problem. To eliminate the 1/r³ singularity in the isovector tensor force from the one-pion-exchange potential in leading order (LO), we add auxiliary-field potentials. The latter could possibly substitute the various counterterms necessary to renormalize the amplitude arising from the one-pion-exchange potential. By treating the short-range interaction of the nucleon-nucleon potential as the dominant piece, we provide an exact solution of the Schrödinger equation and find the binding energy of the deuteron, B, in a first approximation. The long-range interaction is treated in perturbation theory in order to calculate the first correction to B. At higher energies, we take advantage of the separation between the scales 2 m(b) ≫ m(c) ≫ M(QCD) and use a sequence of EFTs to develop a framework to study the exclusive two-body decays of bottomonium into two charmed mesons and apply it to study the decays of the C-even bottomonia. We prove that, at LO in the EFT power counting, the decay rate factorizes into the convolution of two perturbative matching coefficients and three non-perturbative matrix elements, one for each hadron. We calculate the relations between the decay rate and non-perturbative bottomonium and D-meson matrix elements at LO, with next-to-leading-log resummation. The phenomenological implications of these relations are discussed.