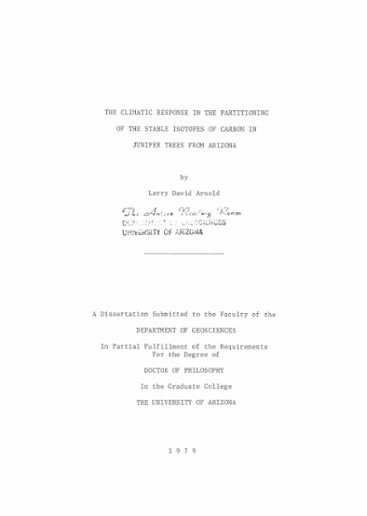 Juniper trees (Juniperus osteosperma, J. monosperma, J. deppeana and J. scopulorum) grow under widely varying climatic and edaphic conditions throughout the American southwest. This study is chiefly concerned with a test of the climatic response in the partitioning of the stable isotopes of carbon in such trees. The relationships developed here, for example, might be used to extract paleoclimatic information from ancient juniper samples preserved in cave middens. In order to test for a climatic response in the leaf cellulose δ¹³C values, leaves from a total of 29 trees were sampled in the immediate vicinity of 9 meteorological stations across the state of Arizona. Care was taken to insure that 22 of the trees experienced only the temperature and precipitation values reflected by their site meteorological stations. As a cross-check, 7 trees exposed to temperature and/or precipitation levels clearly deviant from their site averages were also sampled. In general, each tree was sampled at four places, approximately 2 m above the ground. All leaf samples were reduced to cellulose (holocellulose) before combustion and analysis for their δ¹³C value. The δ¹³C value for each site was derived from an average of 2 to 4 trees per site, the value of each tree being the average of its individual samples. The one sigma 13C variation found between trees at any given site is ±0.38‰; within a single tree, ±0.36‰; and for repeat combustions, ±0.20‰. The δ¹³C values of the juniper sites were regressed against the temperature and precipitation of the individual months and running averages of months across the year using polynomial, multiple regression analysis. Temperature and precipitation were entered as separate variables in a general multiple regression model and also as a combined, single variable (T /P) in a more specific approach. The pattern formed by the multiple correlation coefficients, when plotted by months across the year, closely follows the seasonal variations in photosynthetic activity. Cellulose δ¹³C values have minimum correlation with temperature and precipitation (considered jointly) during summer months and maximum correlation during spring months. For an individual month, the temperature and precipitation (jointly) of April correlated at the highest level with a multiple adj. R = 0.994 and an F = 166; for a maximum seasonal response, March-May reached a multiple adj. R = 0.985, F = 66. The results using the combined, single variable (T /P) were nearly equivalent for the same months: April's adj. R = 0.957, F = 45; March-May's adj. R = 0.985 with an F = 132. The ability of T and P as independent predictors is considerably less than their ability in combination; e.g., 13C g(T) for March-May has an adj. R = 0.80 and 6 13C = h(P) has an adj. R = -0.67 compared to their in- concert adj. R value of 0.985. The results of this study, therefore, strongly support a high degree of climatic sensitivity in the partitioning of the stable isotopes of carbon in juniper leaf cellulose: the correlation coefficients and their F statistics are sufficiently high to consider temperature and precipitation (acting jointly) as accurate predictors of cellulose δ¹³C values in the system studied.