The Arts of Persuasion: Musical Rhetoric in the Keyboard Genres of Dieterich Buxtehude 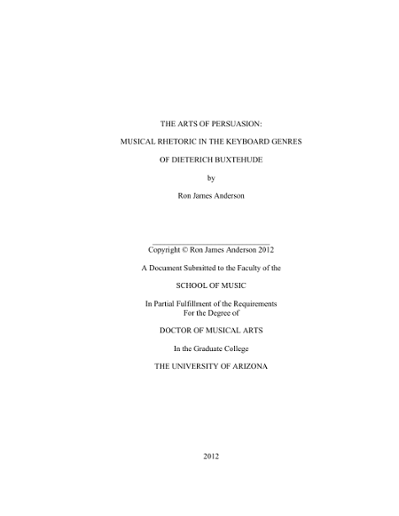 Dietrich Buxtehude (ca. 1637-1707) was a North German composer of the mid-Baroque period. He lived in a time and place in which classical rhetoric, the study of oratory, influenced education, religion, and music. Applying the definition of rhetoric as the art of persuasion, this study surveys the different persuasive strategies employed by Buxtehude in his various keyboard genres. The elements considered in this inquiry include the affects of keys and modes, rhetorical figures, and structures of speeches as applied to music. The style and setting (ethos), intellectual content (logos), and emotional effect (pathos) are explored in each genre as elements of rhetorical persuasion. This study reveals that different genres of Buxtehude's keyboard music utilize different rhetorical strategies and techniques. These strategies vary according to the purpose of the music (i.e., secular or sacred), the presence or absence of an associated text, and the form of the composition. The chorale preludes, since they are driven by texts, use figures such as hypotyposis, assimilatio, anabasis and catabasis, to musically highlight important words in the text, or to amplify the text's underlying meaning. The suites, and parts of the variations, reflect the affects of the various dance movements as described by Johann Mattheson, Gregory Butler, and Patricia Ranum. The rhetorical nature of contrapuntal works is considered in terms of solving a musical issue through musical proofs, as described by Daniel Harrison. Finally, the praeludia embody the rhetorical form of the classical dispositio, or form of a forensic speech. These sectional works are arranged in such a way as to advantageously present both emotional and intellectual facets of a musical oration.The study also asserts that it is stylistically appropriate, given the audience-centered values of rhetorical persuasion, to perform Buxtehude's manualiter works at the piano, providing that they are played in a manner consistent with the style and structure of the music. This view is fortified by evidence that Baroque musicians, compared to modern musicians, were far less specific about instrumentation and musical details. An appendix offers specific performance suggestions for pianists in each of the works discussed in the study.