Ethnic Minorities in Brazil and Spain: Erasure and Stigmatization, Gender, and Self-Representation of Indigenous and Roma Communities 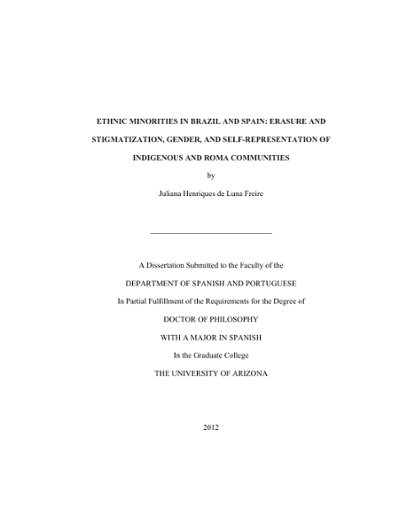 This research is an interdisciplinary work on the use of media by marginalized ethnic minorities for self-representation, using as its frame of reference scholars such as Faye Ginsburg, Gayatri Spivak, Judith Butler, Stuart Hall, Achille Mbembe, and David Harvey. Specifically, this dissertation examines Indigenous communities in Brazil and the Roma (Gypsy) population of Spain, uncovering the multiple discourses through which ethnic identities have to be negotiated within a larger dominant culture, especially in contexts of globalization, and brings to this discussion the theorization of new media. These two highly stigmatized populations have been finding new and more democratic venues for collectively defining their own cultures in the complex process of identity (re)creation. Based on interviews with media producers, I discuss community radio stations, online network groups, video making, and blogs, and how these constitute different tools for promoting culture and conducting political activism. Through constant performances of culture, I argue, they are able to restore and participate in the dialogue on self-determination and minority rights in a different sphere of discourse, both locally and globally, at the same time that they also influence their own (and others') understanding of their ethnic identity. In terms of the impact of media products produced autonomously or in collaboration with non-Indigenous groups, this research also addresses the fact that, despite the efforts of both Indigenous and Roma groups in using these new media as non-hegemonic communication venues, their invisibility as a subject is often repeated, even when sympathetically supported by the discourse of cultural diversity, due to financial and distribution constraints. Ultimately, this study brings together their similarities and differences to determine how these technologies can be both helpful or hinder the self-affirmation and increased autonomy of ethnic minority groups.