A World of Cures: Magic and Medicine in Colonial Yucatán 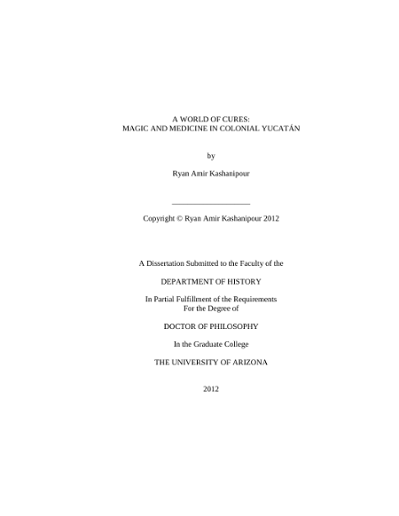 The Yucatán, sixteenth-century Spaniards declared, was tierra enferma (infirmed land) as the destruction of diseases regularly consumed the region. Spaniards, Mayas, Africans, and people of mixed ancestry all fell victim to the cycles of disaster. The shared experiences of disease provided a context for deep lived connections for all. This dissertation examines the beliefs, practices, and relationships related to sickness and healing in the Yucatán from the late-sixteenth century to the late-eighteenth century. At the core of this project are questions about the production and circulation of medical knowledge. How, for instance, did ideas of the natural and supernatural world migrate between supposedly distinct social groups? Why did magical remedies related to the social body whither while unorthodox practices related to the physical body thrive? And how did healing breakdown colonial barriers of ethnicity and status? By exploring matters related to the body, sickness, and healing, this project unveils the complex everyday interactions of a society constantly threatened by disaster. The practices of healing represented the everyday modes of cooperation that operated in direct contrast to the idealized structures of colonial life. Dealing with the intimate relations of healing positions, this work bridges the distinct sub disciplines of cultural and intellectual history. Revealed here are the fundamental limitations of socially-constructed notions of distinction and authority, such as colonial visions of calidad (color), clase (class), and costumbre (culture). The interwoven ideas of status, race, and culture reinforced colonial divisions that tied directly into institutions of exploitation, such as the systems of slavery, tribute, and religious instruction. Nevertheless, my analysis illustrates that on the day-to-day level inhabitants of the Yucatán frequently drew deep connections that cut across idealized divides. Instead of being separated by race, they were united in healing the ills of the colonial experience. And in this manner, the people of the Yucatán created a system of healing that empowered the subjugated, particularly the enslaved and colonized. As such, this project moves from a basic assumption of the commonality of disease to explore the social and intellectual ties of everyday experience in the early-modern Spanish Atlantic World.