Environments of Deposition of the Moenkopi Formation in North-Central Arizona 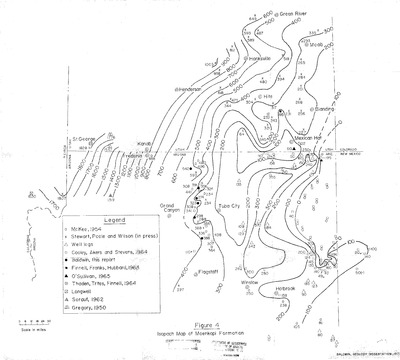 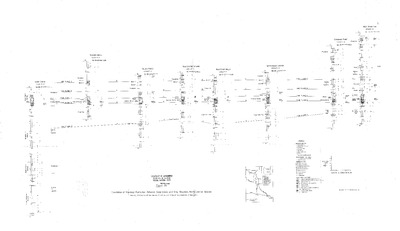 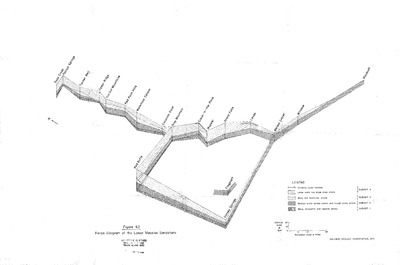 In north-central Arizona, the Moenkopi Formation of Triassic age consists of generally unfossiliferous red mudstones, siltstones, gypsum, and sandstones that contain abundant sedimentary structures, such as ripple marks, cross-stratification, ripple laminae, salt crystal casts, mud cracks, sole marks, parting lineation, and core-and-shell structures. Three informal members were established for this study: the lower member, the lower massive sandstone, and the upper member. Flaser, wavy, and lenticular bedding, bimodal distribution of ripple laminae dips, parallel ripple marks dominant over cuspate ripple marks, gypsum beds and veins, salt crystal casts, and lack of channel deposits are the suite of sedimentary features that are interpreted to indicate a tidal-flat environment during deposition of the lower member. The very fine grained lower massive sandstone can be divided into four subunits, which were formed by a transgression-regression of the sea. Wavy and ripple laminated beds in subunit one were probably deposited in very shallow water. Medium-scale wedge-planar and trough sets of cross strata with mean dip directions to the southeast make up subunit 2 and indicate megaripples formed by longshore drift. Subunit 3 consists of lenticular, wavy, pod-shaped beds that were created in water shallower than that for subunit 2. Continuous, large-scale, low-angle cross strata of uniform thickness and medium-scale wedge-planar and trough sets of cross strata characterize subunit 4 and are typical of beach deposits. The significant sedimentary features in the upper member are unimodal distribution of ripple laminae dips, cuspate ripple marks dominant over parallel ripple marks, channel deposits with shallow trough cross strata, an increase in the number and thickness of sandstone and siltstone beds compared with the lower member, plus vertebrate bones, tracks, and plant impressions. This suite of features indicates a flood-plain environment. Early in Moenkopi time, north-central Arizona was a tidal flat and sabkha. The sea to the west fluctuated east and west and finally transgressed over the entire area. As the sea regressed, a beach formed, and rivers flowing from the east deposited sediment on a westward-prograding flood plain. In the northern, southern, and central portions of the region, sabkhas existed for a time during regression. At the end of Moenkopi time, the entire area was a flood plain. Considering the association of red beds and evaporites, the absence of fossils in the lower member and the lower massive sandstone, the paleowind directions, and the theory of continental drift, the climate during early and middle Moenkopi time was probably hot and arid. The influx of sandstones, the presence of Calamites (?) impressions, and trackways and bones of amphibians in the upper member suggest that the climate became more humid at the end of Moenkopi time.