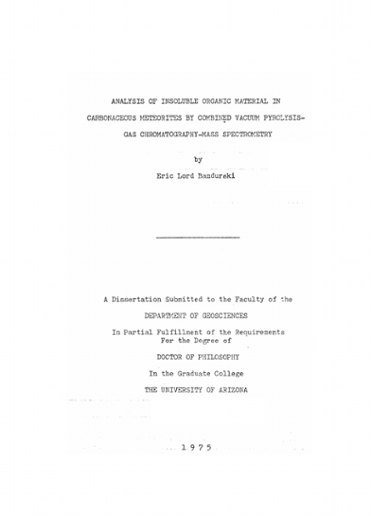 The polymer-like organic material in the Orgueil (Cl) chondrite was analyzed by high vacuum pyrolysis/gas chromatography/mass spectrometry, a new technique specially developed for this type of polymer analysis. Orgueil powder, previously solvent-extracted to remove all soluble organic compounds, whether indigenous or contaminant, was pyrolyzed in temperature steps at 150°, 300°, 450°, and 600°C. Gas chromatographic/mass spectrometric analysis of the vacuum pyrolyzates revealed a series of alkenes to C₈, an extensive series of alkylbenzene isomers, thiophene, alkylthiophenes, and benzothiophene, and the nitrogen compounds acetonitrile, acrylonitrile, and benzonitrile. Comparison of the Orgueil polymer fragments with those reported in polymer analyses of the Murchison and Allende meteorites suggests that qualitatively and quantitatively the Orgueil and Allende polymeric materials are very similar. The presence of acetonitrile, acrylonitrile, and benzonitrile, typical breakdown products of amino acids, in Orgueil pyrolyzates suggests the presence of amino acids in an insoluble form in the meteorite polymer matrix. Changes in the distribution of polymer fragments occurred during high vacuum pyrolyses as the temperature was increased stepwise from 150° to 600°C. These changes imply a progressive alteration in the character of the polymeric material toward a condensed aromatic structure through the preferential loss of aliphatic and heteroaromatic portions at lower temperatures. A possible inference is that the polymeric material in Orgueil is a complex mixture of polymerized materials having different thermal stability. Comparison of vacuum pyrolyzates of the Orgueil polymeric material with pyrolyzates of terrestrial kerogen indicates similarities in composition and structure. These similarities suggest the possibility that meteorite polymers may have formed near the surfaces of meteorite parent bodies by low temperature processes similar to those by which terrestrial kerogen is formed.