Geology and Origin of the Breccias in the Morenci-Metcalf District, Greenlee County, Arizona 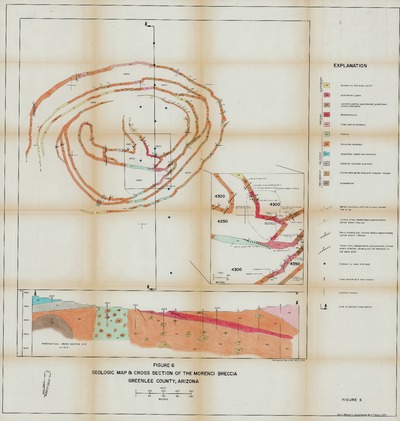 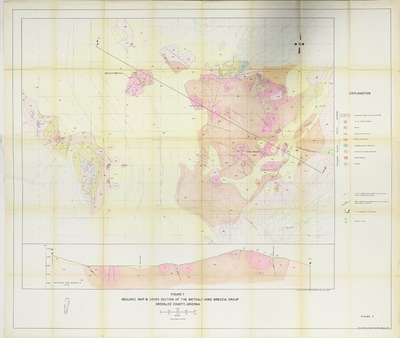 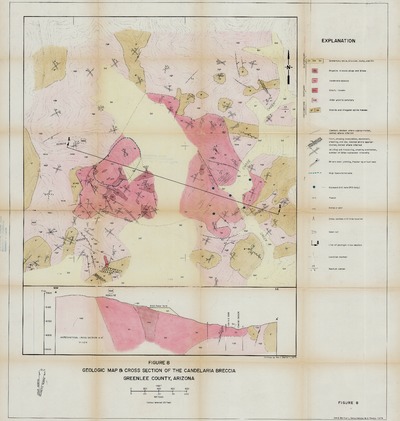 Rocks of the Morenci-Metcalf district consist of Precambrian metaquartzite-schist, granodiorite, and granite overlain by Paleozoic and Mesozoic sediments. Intrusion of igneous rocks, emplacement of breccia masses, and associated hydrothermal activity occurred in Laramide time. Breccias of the district are associated with the youngest sialic intrusive complex. This sequence includes intrusion of the Older Granite Porphyry stock, main stage district hydrothermal alteration, quartz veining, breccia formation, main stage district hydrothermal mineralization, and intrusion of the Younger Granite Porphyry plug. Breccia formation in the Morenci-Metcalf district is similar to breccia descriptions reported in the literature for other porphyry copper deposits. Three breccia types, of separate and distinct origins, are herein described as the Morenci, Metcalf and King, and Candelaria Breccias. The Morenci Breccia is an intrusion breccia that has formed along a pre-existing structural feature during the ascent and emplacement of the Older Granite Porphyry stock. It exhibits an oblate lenticular shape with angular to subrounded fragments in a matrix of quartz, K-feldspar, biotite, and minor rock flour. The Metcalf-King Breccias and numerous smaller breccia masses are the remnants of an original Older Granite Porphyry mantle above the ascending Younger Granite Porphyry complex. The breccia masses occur as large 'xenoliths' floating within the Younger Granite Porphyry plug and were formed by surging and collapse during emplacement of this intrusive. Fragments in the Metcalf and King Breccias grade from angular in the central core to rounded at the contacts and occur in a matrix of sericite, K- feldspar, quartz, and rock flour. The Candelaria Breccia is an explosion pipe and is the largest continuous breccia mass in the district. It is oval with an inverted cone appearance consisting of angular to subangular equidimensional fragments in a matrix of sericite, quartz, specularite, and rock flour. All the breccia masses occur within and subsequent to the district phyllic (quartz-sericite-pyrite) alteration zone. Main stage district copper mineralization postdates emplacement of the Older Granite Porphyry stock and breccia formation, and is prior to the intrusion of the Younger Granite Porphyry plug. Late stage quartz-sericite-pyrite-chalcopyrite veinlets occur in the Metcalf-King Breccia group. Field mapping and laboratory studies indicate that the Older Granite Porphyry stock appears to have been the main district mineralizer.