Economic Geology of the Big Horn Mountains of West-Central Arizona 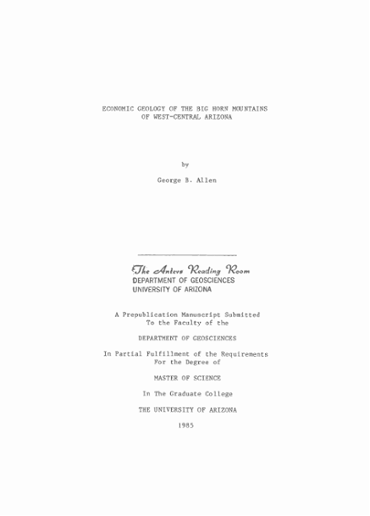 The Big Horn Mountains are a geologically complex range that extends over 500 square km in west-central Arizona. Three major lithologic terranes outcrop: (1) Proterozoic amphibolite, phyllite, schists, gneiss, and granite; (2) Mesozoic monzonite to diorite intrusives; and (3) Cenozoic mafic to silicic volcanic rocks and clastic rocks. The entire area is in the upper plate of a detachment fault and, consequently, contains many low- to high-angle normal faults. Each lithologic terrane has its associated mineral occurrences. The Big Horn district is exclusively hosted in the pre- Tertiary terrane. Most of its mineral occurrences are spatially related to the Late Cretaceous intrusive rocks. One occurrence, the Pump Mine, may be a metamorphic secretion deposit, and therefore, would be middle Proterozoic. The vast majority of the mineral occurrences in the Big Horn Mountains are middle Tertiary in age and occur in three districts: the Tiger Wash barite - fluorite district; the Aguila manganese district; and the Osborne base and precious metal district. Fluid inclusions from Tiger Wash fluorite (T(h) 120 to 210° C, NaCl wt. equivalent 17 to 18 percent not corrected for CO₂) and nearby detachment - fault- hosted Harquahala district fluorite (T(h) 150 to 230° C., NaC1 wt. equivalent 15.5 to 20 percent not corrected for CO₂) suggest cooling and dilution of fluids as they are presumed to evolve from the detachment fault into the upper plate. Mass-balance calculations suggest that the proposed evolution of fluids is sufficient to account for the observed tonnage of barite and fluorite. The Tiger Wash occurrences grade directly into calcite- gangue-dominated manganese oxides of the Aguila district. A wide range of homogenization temperatures (T(h) 200 to 370° C.), an absence of CO₂ and low salinities (NaC1 wt. equivalent 1 to 2 percent) in the Aguila district calcite-hosted fluid inclusions argue for distillation of fluids during boiling or boiling of non saline-meteoric waters. Mass - balance calculations modeling the evolution of Ca and Mn during potassium metasomatism of plagioclase in basalt suggest that little if any influx of these cations is necessary to form the calcite –dominated manganese oxide tonnage observed. The Aguila district grades directly to the east into the base-metal and precious-metal occurrences of the Osborne district. Preliminary data describing geological settings, fluid inclusions, and geochemistry suggest that the Osborne district has a continuum between gold-rich to silver-rich epithermal occurrences. The gold-rich systems have dominantly quartz gangue, with or without fluorite, and are hosted in a variety of rocks, but are proximal to Precambrian phyllite or mid-Tertiary rhyolite. Fluid inclusions from two occurrences representative of the gold -rich systems spread across a minor range (T(h) 190 to 230° C., NaC1 wt. equivalent 17 to 23 percent not corrected for CO₂). Dilution of highly saline fluids is the inferred mechanism for precipitation of gold in the gold-quartz systems. The silver-rich systems have dominantly calcite gangue with or without quartz, and are hosted in mid-Tertiary basalt. Calcite fluid inclusions from a representative high-silver occurrence display a wide range of homogenization temperatures and salinities (T(h) 120 to 370° C., NaC1 wt. equivalent 7 to 23 percent). Boiling and consequent neutralization of acidic solutions is the inferred mechanism for the silver-rich, calcite gangue systems. A model inferring a regional fluid-flow regime and local sources of metals is proposed. Four possible regional and local causes of fluid flow in upper-plate detachment regimes are proposed: (1) regional elevation of geothermal gradients as a result of middle-crustal, lower-plate rocks rising to upper crustal levels; (2) meteoric water recharge along the southeast flank of the Harquahala antiform and consequent displacement of connate waters in the upper-plate of the Big Horn Mountains; (3) local emplacement of feeder stocks to rhyolitic flows; (4) and tilting of major upper-plate structural blocks.