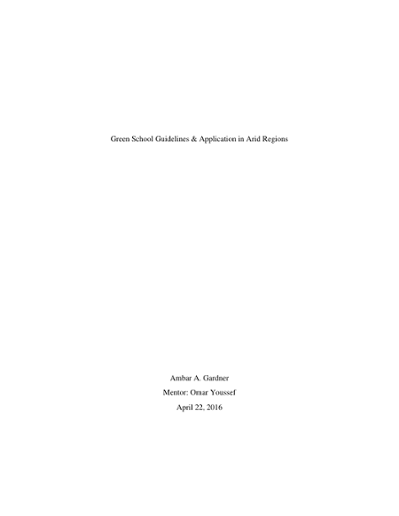 Gardner, Ambar (The University of Arizona., 2015-04-25)
There is a worldwide movement towards sustainability. A stepping-stone towards a sustainability conscience population starts in the education of the younger generation. Focusing on improving education specifically in middle schools in arid regions regarding sustainability will shift and shape youths’ interests and lifestyles into an educated community. This sustainability conscience community will continue to make moral sustainable decisions in their future endeavors. The curriculum implemented will reduce the dropout rate because it is a hand-on curriculum that is interesting and enjoyable for kids. The focus of the curriculum is to rely on outdoor activities to create an outdoor learning environment. The curriculum is based on three different sections: 1) campus-wide adaptable strategies implemented by the students, 2) long term investments implemented by professionals, 3) and hands-on activities that will encourage students to go outdoors and experience real-life problems. To create this education system, the author will propose design guidelines and applications that will be used to improve middle schools particularly in arid regions to become “Green Schools”. This program will validate the sustainable strategies, projects, and efforts done at schools and will also market their school as a model to follow. This will explain what it takes to become a Green School in arid regions and how to achieve these standards. 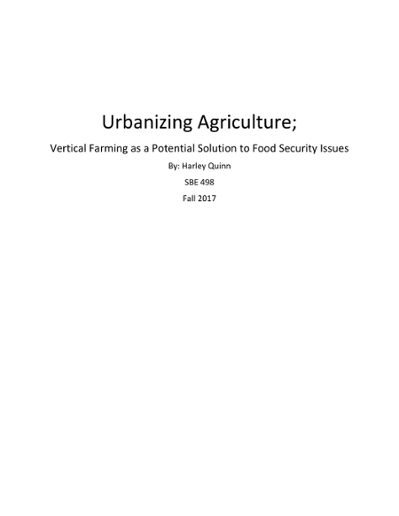 Quinn, Harley (The University of Arizona., 2017)
As countries around the world continue to deplete natural resources and as the world’s population continues to grow, many industries, as well as people, have begun to suffer from the strain on dwindling natural resources. Agriculture and food distribution industries send goods from all around the world to stock grocery stores, restaurants, and other retail centers. The high costs of the distribution format causes people to be unable to afford food even though the amount of production is more than sufficient. “Enough food is produced worldwide to feed all the people in the world (Leathers and Foster, 2009). However, despite this alarming truth, nearly one billion people are suffering from chronic hunger today. There are a wide range of factors that contribute to this problem, however, the most significant is poor food distribution.” (Mission: Feeding the World, 2014) In an attempt to diminish these issues, organizations such as the FAO (Food and Agriculture Organization of the United Nations) have focused their research on various ways to grow within smaller regions and lower transportation distances to limit costs. They focus on these attempts largely to reach their Urban Food and Supply goals of providing efficiency in distribution to stabilize supplies of low-cost food to provide for everyone rather than only those who can afford it. (FAO, 2000) Additionally, work has been done to decrease waste at points along the supply chain. The challenge and goal, however, should not be to limit the scope of travel by a small fraction, but completely eradicate it. Focusing on agricultural techniques that occur within urban areas could allow the growth of most agricultural products within the confines of a city. Practicing locally grown agricultural techniques could diminish food distribution costs as the distance of travel would become within a quick drive or walk. The inhabitants of the city could purchase food out of their own neighborhoods at a much lower cost. Restaurants and grocery stores could limit their supplies so that very little went to waste. Additionally, farms would be close by, meaning there would be no issues getting food in enough time as well as allowing a greater awareness of the product’s growing conditions. Residents would immediately have a much greater understanding of their food supply chain and could participate in the growing of those products. Classical agricultural techniques do not work in this setting. In typical agriculture techniques, the growing population will outgrow the amount of land we have to grow crops. (Biello, 2009) Already today, over 80% of the land that is suitable for raising crops is in use (FAO and NASA). Historically, some 15% of that has been laid waste by poor management practices (Despommier, 2011). To simply account for the population growth predicted, food production will have to increase by 70% according to the UN’s Food and Agriculture Organization (2011). As the same percentage of people move towards urban living, the question is, should the food production industries follow suit? Unfortunately, space is both limited and at a premium in an urban environment. Vertical farming could be a solution to agriculture needs with population growth. Vertical farming allows skyscrapers to be filled with floor upon floor of orchards and fields, producing crops all year round (Technology Quarterly, 2010). The benefits of successful vertical farming are exceptional as it could reduce transport costs and carbon emissions, free up land, reduce spoilage, and finally, limit the water usage as compared to classic agriculture techniques. Unfortunately, there are limited examples of vertical farming and it remains mostly untested; however, some examples have begun to show up around the world. In the US, no vertical farms have been constructed, although the materials and technology exists. In the 2015 World’s Fair in Milan, this technology was showcased by Biber Architects in their project “Farm Walls”, a hydroponic technology that allows the plants to grow without soil and vertically (ZipGrow, 2017). Knowing the potential benefits of this type of system, the question remains of should agriculture transfer to this arrangement? What are the potential costs of these systems and technologies? Do the benefits outweigh the costs? Finally, what potential downfalls could result for farmers in non-urban environments? This capstone intends to analyze the costs and benefits of vertical farming technology as well as explore case studies of existing vertical farms to determine if it is an appropriate strategy for cities to adapt to address food insecurity.