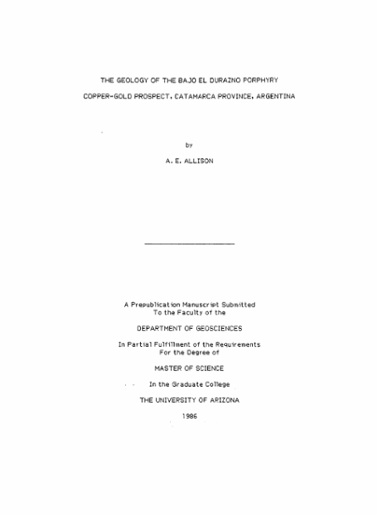 The Bajo El Durazno prospect is a small, gold-rich porphyry copper-type prospect located in Catamarca Province, northwest Argentina. It is one of a cluster of at least fourteen porphyry copper-type occurrences and numerous younger polymetallic epithermal veins, all of which are genetically related to the waning stages of magmatism that produced the Farallon Negro volcanic complex, an isolated Upper Miocene shoshonitic andesitic volcanic center. Porphyry copper-type hydrothermal activity at the Bajo El Durazno prospect is associated with a small east-northeasterly elongated andesite porphyry stock. The stock was emplaced at 8.7 m.y. into comagmatic and petrologically similar andesitic volcanic breccias that form the highly dissected basal remnants of the main eruptive center of the volcanic complex. Intramineral, crudely radial andesite porphyry dikes accompanied the development of concentric zones of hydrothermal alteration centered on the stock. These alteration zones of potassium-silicate alteration in the stock and adjacent wallrocks surrounded by an essentially coeval, weakly developed propylitic alteration zone. The propylitic alteration assemblage, which occurs as both pervasive replacement and as veinlets, consists mainly of chlorite, epidote, calcite, and magnetite, with lesser clays and zeolites. The potassium-silicate alteration zone is character iced by the replacement of primary minerals by secondary biotite, magnetite, anhydrite, quartz, sericite, and calcite. Roughly coeval and coextensive with the earliest stages of potassium-silicate and propylitic alteration was a brief period of magnetite alteration consisting mainly of well-banded magnetite ± quartz ± biotite veins. This volume also includes the development of irregular magnetite-rich masses in the stock of probable late-magmatic origin. Major copper-gold mineralization with minor silver and molybdenum developed during later stages of potassium-silicate alteration after the magnetite alteration event, although highest grade mineralization is commonly localized in areas of most intense magnetite alteration. The bulk of the mineralization occurs as veins within the stock and its wallrocks near their mutual contact; these veins contain quartz, calcite, magnetite, pyrite, chalcopyrite, and lesser sericite, chlorite, orthoclase, biotite, siderite, molybdenite, bornite, sphalerite, galena, tetrahedrite-tennantite, and native gold. Some of the gold and silver occur in solid solution in sulfide minerals, and supergene enrichment of copper is not economically significant. Copper and gold grades are generally less than 0.4% and 1 ppm, respectively. The three early alteration assemblages were later overprinted by patchy areas of phyllic alteration consisting mainly of the assemblage sericite, quartz, pyrite, and anhydrite/gypsum in an irregular northeasterly elongated halo. Phyllic alteration is developed to its greatest extent in an irregular annular zone straddling the boundary between the potassium- silicate and propylitic alteration zones and is generally coincident with the most highly fractured rocks in the prospect. Irregular patches of weak to intense silicification are superimposed on all other alteration types, and a number of distinctive, poorly mineralized, phyllically altered and silicified fracture zones are distributed in a somewhat radial pattern around the stock. Low grade disseminated(?) gold mineralization is found over one square kilometer in phyllically and propylitically altered rocks surrounding the central mineralized zone. A fluid inclusion study has revealed the presence of two hypersaline liquid-rich fluid inclusion types having salinities of 73.0-87.0 and 50.0-79.5 weight percent NaC1 + KCl equivalent, respectively, a single low salinity liquid-rich inclusion type (6.6-8.0 weight percent NaCl equivalent), and abundant vapor-rich inclusions. Hematite, anhydrite, and a variety of unidentified opaque and nonopaque minerals occur in many inclusions. Magnetite, potassium-silicate, and phyllic-silicic alteration in silicified zones formed at temperatures between 310° C and 500° C and were the product of the less saline of the two hypersaline fluids; this fluid episodically boiled. Copper-gold mineralization in potassium-silicate rocks probably peaked at about 395° C. Fluid salinities and temperatures gradually decreased with time, and during later stages of alteration they also decreased with greater distance from the hot center of the system, perhaps as a result of dilution. Although proof is lacking, the two high salinity fluids and the low salinity vapor may be magmatic in origin, and the low salinity fluid may represent a late-stage influx of meteoric water that encroached on the waning magmatic hydrothermal system. A depth of formation of 1.6 kilometers is estimated for the presently exposed portion of the Bajo El Durazno prospect based on the fluid inclusion data.