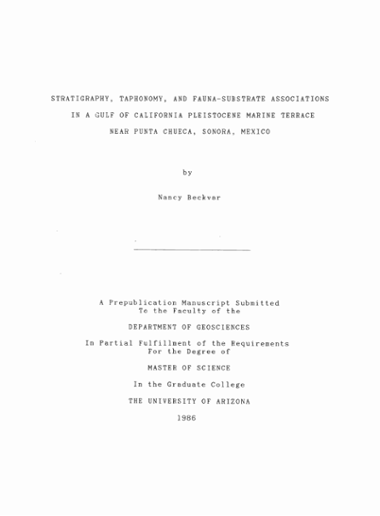 A richly fossiliferous Pleistocene terrace located near Punta Chueca, Sonora, Mexico, contains sediments that were deposited at the interface of an alluvial fan and shallow marine environment. Shell beds range from extremely dense fossil concentrations in sand, gravel, and cobble sized sediments to sparsely fossiliferous shell hashes. Three subenvironments were recognized: 1) shallow-subtidal to lower intertidal; 2) mid- to upper intertidal; and 3) supratidal. Shallow-subtidal to lower intertidal facies consist of shell beds with infaunal bivalves in life position, shell beds with fauna not in life position, and a Porites biostrome. Mid- to upper-intertidal facies include shell hash layers, and pebble and cobble lenses that are characterized by abundant autochthonous epi- faunal gastropods (i.e. limpets). Sparsely fossiliferous supratidal sands are overlain by Holocene alluvial fan deposits. Coarse conglomerates were not reworked by marine processes whereas finer conglomerates were, as evidenced by horizontal bedding and segregation of gravel and sand. The coarsest sediments - metamorphic cobbles - are relict and were probably derived from an earlier terrace. The following criteria were used to interpret the mode of shell bed formation: encrustation frequency, valve articulation, bivalve orientation, shell condition, and shell density (hardpart abundance). Storms played a major role in the formation of fossil concentrations. Four shell beds were interpreted as storm beds and one shell bed was interpreted as a condensed bed. Storm beds differ from condensed beds in having lower encrustation frequencies, higher percentages of articulated bivalves, and shells in very good condition. Association of hard-substrate faunas with gravel sediments and of infaunal molluscs with sand substrates suggests that little transport between habitats occurred. The high percentage of articulated valves, unworn appearance of most shells, predominance of concave-up oriented valves, and strong association of fauna with grain size all reflect a generally low energy environment, but one periodically disturbed by storm events.