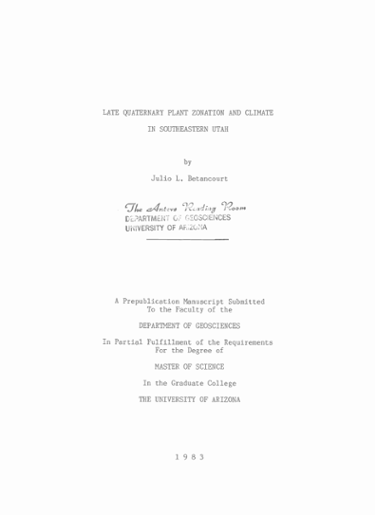 Plant macrofossils from packrat middens in two southeastern Utah caves outline development of modern plant zonation from the late Wisconsin. Allen Canyon Cave (2195 m) and Fishmouth Cave (1585 m) are located along a continuous gradient of outcropping Navajo Sandstone that extends from the Abajo Mountains south to the San Juan River. By holding the site constant, changes in the floral composition for a plot of less than one hectare can be observed, even if sporadically, over tens of millennia. At Allen Canyon Cave, engelmann spruce-alpine fir forest was replaced by the present vegetation consisting of pinyon-juniper woodland on exposed ridgetops and cliffside stands of Douglas fir, ponderosa pine, and aspen. Xerophytic woodland plants such as pinyon, Plains prickly pear, and narrowleaf yucca arrived sometime in the middle Holocene between 7200 and 3400 B.P. At Fishmouth Cave, Utah juniper in Holocene middens replaced blue spruce, limber pine, Douglas fir, and dwarf and Rocky Mountain junipers in late Wisconsin samples. Disharmonious associations for the late Wisconsin occur only at the lower site with the xerophytes Mormon tea, Plains prickly pear, and narrowleaf yucca growing alongside subalpine conifers. One possible explanation involves the late Wisconsin absence of ponderosa and pinyon pines from the Colorado Plateaus. Released from competition at their lower limits, subalpine conifers were able to expand into lower elevations and mix with xerophytic plants found today in understories of pinyon-juniper and ponderosa pine woodlands. Quantitative climatic estimates are derived for the late Wisconsin by applying vertical lapse rates for temperature and precipitation to the amount of vegetation depression. The Fishmouth Cave sequence indicates a minimum lowering of 850 m for blue spruce, limber pine, and dwarf juniper. A depression of at least 700 m for engelmann spruce and alpine fir is suggested for the Allen Canyon locality. Use of conservatively low lapse rates for stations below 2080 m yields a 3-4°C cooling from present mean annual temperature and 35 to 60 percent more rainfall than today. Steeper lapse rates associated with more mountainous terrain suggest a 5°C lowering in temperature and up to 120 percent increase over modern precipitation.