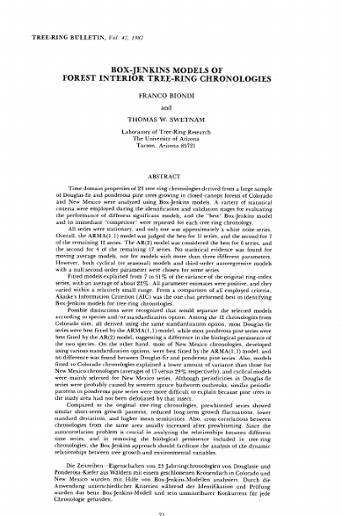 Laboratory of Tree-Ring Research, The University of Arizona, Tucson, Arizona

Time domain properties of 23 tree-ring chronologies derived from a large sample of Douglas-fir and ponderosa pine trees growing in closed-canopy forests of Colorado and New Mexico were analyzed using Box-Jenkins models. A variety of statistical criteria were employed during the identification and validation stages for evaluating the performance of different significant models, and the "best" Box-Jenkins model and its immediate "competitor" were reported for each tree-ring chronology. All series were stationary, and only one was approximately a white noise series. Overall, the ARMA(1,1) model was judged the best for 11 series, and the second for 7 of the remaining 12 series. The AR(2) model was considered the best for 6 series, and the second for 4 of the remaining 17 series. No statistical evidence was found for moving average models, nor for models with more than three different parameters. However, both cyclical (or seasonal) models and third-order autoregressive models with a null second-order parameter were chosen for some series. Fitted models explained from 7 to 51% of the variance of the original ring-index series, with an average of about 22 %. All parameter estimates were positive, and they varied within a relatively small range. From a comparison of all employed criteria, Akaike's Information Criterion (AIC) was the one that performed best in identifying Box-Jenkins models for tree-ring chronologies. Possible distinctions were recognized that would separate the selected models according to species and /or standardization option. Among the 12 chronologies from Colorado sites, all derived using the same standardization option, most Douglas-fir series were best fitted by the ARMA(1,1) model, while most ponderosa pine series were best fitted by the AR(2) model, suggesting a difference in the biological persistence of the two species. On the other hand, most of New Mexico chronologies, developed using various standardization options, were best fitted by the ARMA(1,1) model, and no difference was found between Douglas-fir and ponderosa pine series. Also, models fitted to Colorado chronologies explained a lower amount of variance than those for New Mexico chronologies (averages of 17 versus 29% respectively), and cyclical models were mainly selected for New Mexico series. Although periodicities in Douglas-fir series were probably caused by western spruce budworm outbreaks, similar periodic patterns in ponderosa pine series were more difficult to explain because pine trees in the study area had not been defoliated by that insect. Compared to the original tree-ring chronologies, prewhitened series showed similar short-term growth patterns, reduced long-term growth fluctuations, lower standard deviations, and higher mean sensitivities. Also, cross-correlations between chronologies from the same area usually increased after prewhitening. Since the autocorrelation problem is crucial in analyzing the relationships between different time series, and in removing the biological persistence included in tree-ring chronologies, the Box-Jenkins approach should facilitate the analysis of the dynamic relationships between tree growth and environmental variables.