Richard Stoffle Collection
JavaScript is disabled for your browser. Some features of this site may not work without it. 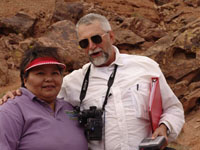 This collection is composed of 58 funded research projects that were either directed by or co-directed by Richard Stoffle while his research team was based in one of three universities (1) University of Wisconsin-Parkside, (2) University of Michigan, and (3) University of Arizona. These projects occurred over the past 40 years and at some level represent the growth and evolution of applied anthropology research over this time. The collection includes the seminal 1978 study report entitled Persistence and Power, which was the first American Indian social impact assessment conducted in the United States (Stoffle was a contributing author). Naturally many other applied research topics emerged during this period; still the projects in this collection do provide a perspective on the substance and style of funded assessments occurring in the United States and the Caribbean.

Many of the projects were funded or regulated under the National Environmental Policy Act of 1969 [Public Law, P.L. 91-190; Stat 83 Stat. 852 (1969)] and are thus considered Social Impact Assessments, a field of research practice that was greatly expanded, elaborated, and formalized during this period (The Interorganizational Committee on Principles and Guidelines for Social Impact Assessment 2003). Today, these and many other studies have further led to the state of the art in impact assessment that is called Sustainability Assessment (Bond, Morrison-Saunders and Howitt 2012).

Each project in this Collection (which is called A Collection in this community and listed down the left side of this page) is introduced with a brief summary and contains the technical report that finalized the work. Some projects lasted for more than a decade and thus had additional research tasks, which resulted in multiple technical reports. Most projects also have one or more power points which were prepared to convey findings to the funding agency, participating people, and members of professional societies. For most collections the photos from the study have been organized by the major topics in the technical report to better illustrate the study process and its results. When peer-reviewed publications occurred after the study was completed these articles, book chapters, and books are listed together just below the project summary.

The collection makes available the findings from millions of dollars of federally funded and federally regulated studies. The studies were designed to improve the management of natural and human resources and to increase the quality of environmental decision-making. As such, all of the studies were public. The funding agencies and the people participating in the study initially approved the studies. Feedback during the studies was ongoing. Final technical reports were reviewed, approved, and distributed to persons who were officially designated as points of contact by the funding agency and among the participating people. Additional distribution of the technical reports continued afterward. Both the funding agency and the participating people made additional copies and further distributed the report. Many reports were placed in government databases and public libraries. Access to the reports, however, was always somewhat limited largely due to the costs of report publication; early reports often each cost hundreds of dollars to duplicate and bind. Color copies were rare. Today with modern computers which seemingly have unlimited space and the Internet which can easily move large work products; it is now possible to make the research results of these studies available and hopefully useful to future generations.

Collections in this community