Old Spanish Trail Ethnographic Studies
JavaScript is disabled for your browser. Some features of this site may not work without it. 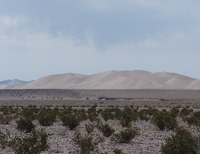 The Old Spanish National Historic Trail commemorates the overland trade route between the far northern Mexican provinces of New Mexico and Alta California. It includes over 2,700 miles of trail alignments through New Mexico, Colorado, Arizona, Utah, Nevada, and California, connecting Santa Fe with Los Angeles. Between 1829 and 1848, the OST was the primary land route between the two provincial outposts of Santa Fe and Los Angeles. During these years, it was used extensively by Mexican and American traders who traded New Mexico woolen goods for California-bred horses and mules. The establishment of the OST enhanced Santa Fe’s position as the hub of an overland continental trade network that linked American and Mexican markets through the Santa Fe Trail (western Missouri to Santa Fe), El Camino Real de Tierra Adentro (Central Mexico to Santa Fe) and the OST (Santa Fe to southern California).

The trail was used by members of long-established Hispanic communities in northern New Mexico, southern Colorado, and southern California, and by entrepreneurs drawn to the interior of the West from Mexico and the eastern United States. The lands it crossed were occupied by small settlements of primarily Hispanic and Native American origin, and used for sustaining territories by a number of Native American tribes for many centuries. Hispanic settlements at the eastern and western ends of the trail were established from the 1600s through the 1800s.

Anglo populations began to enter the country in significant numbers only shortly before the trail was blazed. The trail corridor crosses lands of interest to rural populations, Native American sovereign nations, and communities and municipalities ranging in size from small hamlets to the metropolitan areas of greater Los Angeles, California, and Las Vegas, Nevada. Some of these communities hold ancestral affiliation to the lands crossed by the trail, some are connected to the trail through the presence of descendant populations (populations descended from trail users of the early 19th century, as well as populations descended from communities in place during the period of trail significance), and some are associated with the trail through the historical development of transportation networks only tangentially linked to the OST commercial enterprise of the early 19th century. The economic and historic interests of each of these populations must be assessed and evaluated independently.