Nevada Test Site Native American Ethnographic Studies
JavaScript is disabled for your browser. Some features of this site may not work without it. 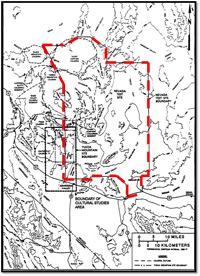 This research relationship was first established in the late 1980s during the Yucca Mountain ethnographic projects. Following the completion of that research, cultural resource studies and Native American consultation shifted to Nevada Test Site, the neighboring management unit. During the early stages of the consultation relationship, the culturally affiliated Indian and pan-Indian entities unified themselves into a single indigenous organization, the Consolidated Group of Tribes and Organizations, or CGTO, for the purpose of defending their collective interests in the lands and resources comprising the NTS in south –central Nevada. Since 1994, this Indian organization has consulted with the DOE/NV on an increasingly wider range of issues that affect Indian cultural, religious, and resource values on and around the NTS. The book also examines these cultural and religious values regarding traditional lands and resources, and the cultural significance of resources, objects, places, and landscapes within the boundaries of this facility that have been affected by DOE/NV mission activities. The consultation relationship was initiated, and continues into the present, as a result of the implementation of a series of federal environmental laws and regulations that require consultation with American Indian tribal governments when activities conducted with federal funds, in federal facilities, or both, have the potential to adversely impact traditional American Indian resources and cultural practices. Most notable among these is the American Indian Religious Freedom Act (AIRFA), which was passed by the United States Congress in 1978. Prior to that time, cultural resources were managed mainly in accordance with the provisions set forth in Sections 106 and 110 of the National Historic Preservation Act.

The Department of Energy/ American Indian program was initiated in 1991 to ensure agency compliance with AIRFA for the NTS. Its goal was the development and implementation of a government-to-government consultation program designed to elicit American Indian comments and recommendations on the potential effects of DOE/NV activities and programs on American Indian traditional resources on the NTS. Initially, the NTS consultation included all of the YMSCO tribes and official Indian organizations. At the request of the CGTO, involvement of tribal governments subsequently expanded to include the Ely Shoshone Tribe in Nevada and two additional official Indian organizations, the Owens Valley Board of Trustees and the Southern Paiute Tribal Chairman's Association. Fifteen tribes and one official organization still participate on a regular basis and maintain a current list of OTCRs.

Zedeño, M.N., D. Austin, and R. Stoffle
1997 Landmark and Landscape: A Contextual Approach to the Management of American Indian Resources. Culture and Agriculture 19: 123-129.