Arizona Strip Cultural Landscape Studies
JavaScript is disabled for your browser. Some features of this site may not work without it. 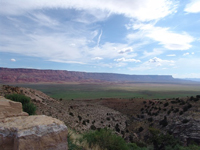 These projects were funded by the Bureau of Land Management’s Arizona Strip field office and Grand Canyon-Parashant National Monument. These projects focused on understanding and documenting Southern Paiute history and cultural connections throughout the region known as the Arizona Strip.

The first project which was funded solely by the Bureau of Land Management (BLM) was entitled,the Arizona Strip Cultural Landscape and Place Name Study. The study had five main objectives: (1) to provide an overview of American Indian Cultural Landscapes and their relevance for federal agency practices, (2) to describe the ethnographic, historic, and cultural bases for Southern Paiute communities’ access to particular sites within the Arizona Strip, (3) to identify Numic place names, trails, and stories associated with selected cultural landscape sites within the Arizona Strip, (4) to include descriptions of the cultural significance of natural resources and physical environmental features at selected cultural landscape sites, and (5) to determine the need for future studies based on gaps identified in the historic and ethnographic record.

The second project was funded in 2011 by Grand Canyon-Parashant National Monument. This study served as a follow up to the 2005 reports. The second study focused on the Southern Paiute cultural response to the Little Springs volcanic eruption and subsequent lava flow, which occurred just south of Mount Trumbull around A. D. 1075.