Caribbean: Bahamas Biocomplexity Project
JavaScript is disabled for your browser. Some features of this site may not work without it. 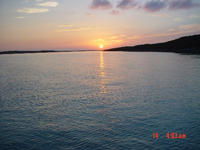 The study was part of a Biocomplexity Grant from the National Science Foundation. The overall project is administered by the Center for Biocomplexity and Conservation at the American Museum of Natural History.

The University of Arizona—College of the Bahamas Study Team is working with three other research teams to better understand the social and cultural dimensions of local settlements’ multidimensional relationships to the sea. The overall purpose of this study was to determine why people in the Exumas Islands and Cays have responded differentially to the proposed establishment of Marine Protected Areas (MPAs), also known as marine reserves, near their settlements. Our research team has spoken with people living near three MPA locations that were proposed in (and subsequent to) a 1999 study entitledScientific Review of the Marine Reserve Network Proposed for the Commonwealth of the Bahamas by the Bahamas Department of Fisheries(Stoner, Hixon, Dahlgren 1999), and approved as MPAs by the Bahamian government. That study proposed MPAs in two areas in the northern and central portions of the Exumas. More recently a modified MPA proposal was developed and presented for Little Exuma in the south. How local people have (or have not) responded to these three proposals is a focus of our study, but also we are more generally interested in why people respond the way they do to any conservation efforts in their nearby marine environments.

This research involved 572 interviews conducted with 193 people from six coastal communities in the Exumas. Many people were interviewed multiple times with various instruments. Gender balance was approached in the 352 formal interviews but an imbalance towards males occurred in the 221 informal interviews. Approximately the same percentage of each community was formally interviewed with an overall sample size of 34% of census recorded population.