American Indians and the Nevada Test Site: A Model of Research and Consultation 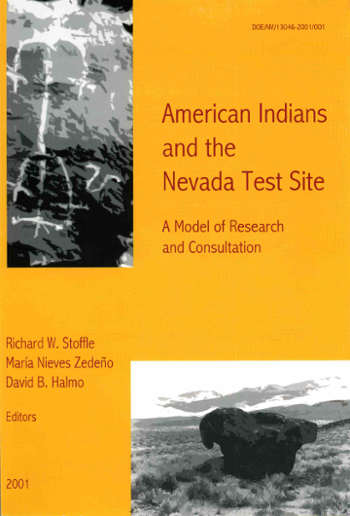 Bureau of Applied Research in Anthropology, University of Arizona

This item is part of the Richard Stoffle Collection. It was digitized from a physical copy provided by Richard Stoffle, Bureau of Applied Research in Anthropology, School of Anthropology at the University of Arizona. For more information about items in this collection, please email Special Collections, askspecialcollections@u.library.arizona.edu.

This book examines the long -term consultation partnership involving a federal agency, a group of American Indian tribes, and a team of anthropologists. This book highlights the history, evolution, dynamics, and results of the consultation relationship between the U.S. Department of Energy Nevada Operations Office (DOE/NV) and 20 tribes and organizations composed of ethnic Numic-speaking Western Shoshone, Southern Paiute, and Owens Valley Paiute -Shoshone people. A team of applied anthropologists currently affiliated with the Bureau of Applied Research in Anthropology at the University of Arizona in Tucson (UofA), and a team of archaeologists from the Desert Research Institute (DRI), a unit of the University and Community College System of Nevada in Reno and Las Vegas, Nevada, respectively, have provided technical assistance and contract consulting services to the Indian tribes and the DOE/NV, first on the Yucca Mountain Site Characterization Office (YMSCO) and, in the past decade, on the Nevada Test Site (NTS). During the early stages of the consultation relationship, the culturally affiliated Indian and pan-Indian entities unified themselves into a single indigenous organization, the Consolidated Group of Tribes and Organizations, or CGTO, for the purpose of defending their collective interests in the lands and resources comprising the NTS in south –central Nevada. Since 1994, this new Indian organization has consulted with the DOE/NV on an increasingly wider range of issues that affect Indian cultural, religious, and resource values on and around the NTS. The book also examines these cultural and religious values regarding traditional lands and resources, and the cultural significance of resources, objects, places, and landscapes within the boundaries of this facility that have been affected by DOE/NV mission activities. The consultation relationship was initiated, and continues into the present, as a result of the implementation of a series of federal environmental laws and regulations that require consultation with American Indian tribal governments when activities conducted with federal funds, in federal facilities, or both, have the potential to adversely impact traditional American Indian resources and cultural practices. Most notable among these is the American Indian Religious Freedom Act (AIRFA), which was passed by the United States Congress in 1978. Prior to that time, cultural resources were managed mainly in accordance with the provisions set forth in Sections 106 and 110 of the National Historic Preservation Act.