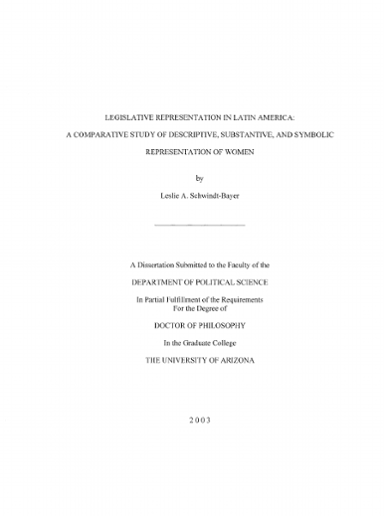 Women and minorities have long been underrepresented in politics but, in recent years, pressure has mounted to diversify national legislatures. A prominent argument is that increasing the percentage of seats held by an underrepresented group will lead to greater representation of that group's interests and provide symbolic benefits for its members in society. I test this thesis with an empirical analysis of the interrelationships between descriptive, substantive, and symbolic representation of women. In Part I, I examine the determinants of women's election to office (descriptive representation) with a cross-national sample of thirty-two countries. In Part II, I narrow the study to an in-depth analysis of substantive representation of women in Latin America defining substantive representation as responsiveness and focusing on four forms of responsiveness--policy, allocation, service, and symbolic. I argue that descriptive characteristics of legislators (such as gender), formal institutions, and socioeconomic environments shape the extent to which legislators respond to women and their interests. In this section, I draw on time-serial bill initiation and committee assignment data in Argentina, Colombia, and Costa Rica as well as responses to an original survey of legislators conducted during 2001-2002. In Part III, I return to a large, cross-regional sample of countries to explain variation in symbolic representation measured as the amount of confidence that women in society have in their national legislature. Further, I use structural equation modeling to estimate the direct and indirect relationships between formal, descriptive, substantive, and symbolic representation. I conclude that the four forms of representation are interrelated. Proportional representation electoral rules help women win legislative office and, once in office, female legislators are more responsive to women's interests than male legislators. Women are more likely to initiate women's interest bills, sit on women's interest committees, conduct constituency service on behalf of women, and partake of symbolic actions that benefit female constituents. Further, women's descriptive representation engenders greater trust among women in society for their national legislatures. Formal rules that define the process of representation can make legislatures more diverse which in turn has significant implications for substantive and symbolic representation of underrepresented groups.