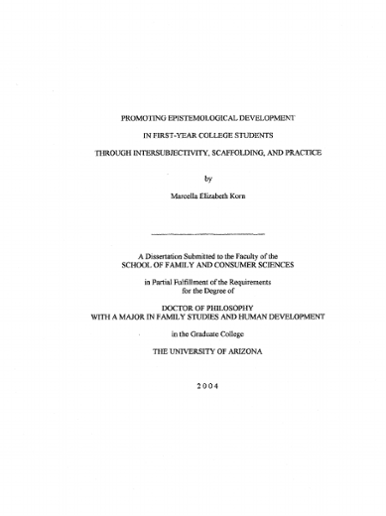 The study attempted to explore if epistemological development occurs among first-year college students and to untangle the process of that development by investigating the role of intersubjectivity and metacognitive awareness as mechanisms of change. Epistemological development is an orderly sequence of five increasingly complex positions through which students reason about the nature of knowledge (Perry, 1970). Intersubjectivity is the cognitive developmental process whereby interacting peers who begin problem-solving tasks with different understandings arrive at shared understanding in the course of communication with each other (Tudge, 1992). Metacognitive awareness, the ability to facilitate the control aspect of cognition (Schraw & Dennison, 1994), may play an important role in the resolution of ill-structured problems (Kitchener, 1983). Eighty-three participants (treatment N = 50; control N = 33) completed the Measure of Epistemological Development, an open-ended paper-and-pencil five-domain instrument which was created for this study (Baxter-Magolda, 1987; Moore, 1990) and administered at pre-test, post-test, and follow-up. The developmental process variables were measured by self-report intersubjectivity items (i.e., exposure to new forms of reasoning; adopted others' reasoning) and the Metacognitive Awareness Inventory Regulation of Cognition Sub-Scale (Schraw & Dennison, 1994). Treatment group discussions about ill-structured problems were guided by seven probe questions (Kitchener & King, 1981), offered scaffolding and contextual support (Kitchener, Lynch, Fischer, & Wood, 1993), and ended with peers reaching agreement. Epistemological reflection developed significantly between pre-test and follow-up (t = -2.60, p < .01). The control group changed little over time, while the treatment group slightly regressed from pre-test to post-test then developed significantly by follow-up F(df = 2, 7.06, p < .01). Intersubjectivity moderated change in epistemological reflection between pre-test and follow-up (R² = .645, p < .05). Treatment participants who reported the lowest levels of intersubjectivity scored higher on follow-up epistemological reflection than all other treatment participants. Metacognitive awareness moderated change in epistemological reflection differentially for treatment and control participants. The unique effects of the metacognitive-awareness-by-condition interaction term and metacognitive awareness remained after the effects of pre-test epistemological reflection, metacognitive awareness, and the pre-test-by-metacognitive-awareness-by-condition interaction term were controlled statistically (R² = .532, p < .05).