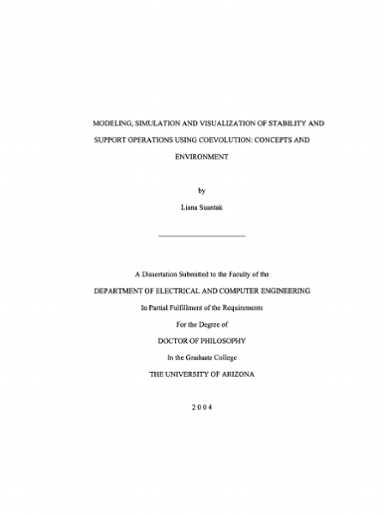 Current military simulations focus on high resolution, conventional warfare models based on well-established military doctrine. These systems allow commanders and soldiers to investigate friendly and enemy courses-of-action (COAs) that have been created by military commanders and their analysts. One exception to these systems is FOX, which generates friendly COAs using a genetic algorithm that engage with several static enemy COAs in conventional warfare scenarios. This dissertation extends the use of genetic algorithms to coevolution, a multi-sided genetic algorithm, for non-conventional warfare operations, termed Stability and Support Operations (SASO), which constitute many of the current major military operations in the world. It presents the concepts for a system that generates, simulates, and visualizes COAs for non-conventional units as well as conventional units' force distributions in a SASO environment. The simulation includes such factors as political climate, multi-sided faction animosities, and the influence of information operations on local populations. To allow fast wargaming, many concepts such as terrain and incident types are abstracted, instead of requiring the time-consuming high-resolution models currently in use. It also proposes that the analysis of coevolution strategies benefits from examining changes in fitness function, instead of the fitness function directly, as is generally done for one-sided genetic algorithms. As inputs, a military expert defines a scenario by specifying an environment of locales, factions and entities that belong to multiple sides. In the Sheherazade SASO Simulation, these entities occupy and move between locales, engage in combat, and work to calm or agitate the local populations. Each entity has a COA, which determines its planned moves and targets of attack. For conventional military units, the COAs represent their force distribution. A coevolution algorithm, or a multi-sided genetic algorithm, evolves these COAs based on the scores that result from the simulation. Visualization tools, including iconographs and other configural displays, allow the analysis and comparison of COAs over generations. The COAs that evolve represent strategies for each side to fulfill their competing goals, and can be used by an analyst as a decision support tool for training or planning.