Apocalyptic poverty: Gerard Segarelli, Fra Dolcino and the legitimization of deviance among the Order of Apostles, 1260-1307 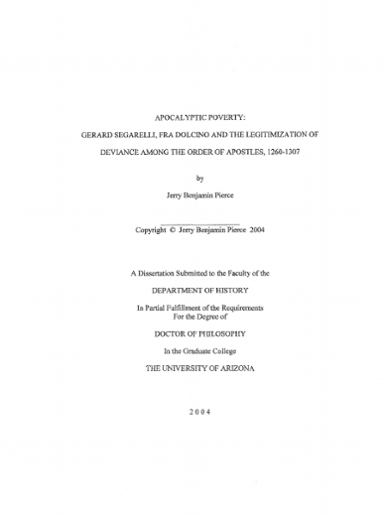 Despite medieval and contemporary treatments of the Order of Apostles, an Italian lay religious movement that flourished from 1260 to 1307, that have alleged that its members were sexually immoral, promoted heresy and engaged in an apocalyptic, armed insurrection, this study argues that the Order was not immoral, nor inherently heretical and violent. Medieval sources, including chronicles and inquisitional records, have presented an overwhelmingly negative and biased account of the beliefs and actions of the Order of Apostles, which has then been uncritically repeated by most English-language scholarship, providing only a cursory overview of the Order, and often neglecting to analyze the intentions of medieval authors such as the Franciscan, Salimbene of Parma, and the Dominican inquisitor, Bernard Gui. This oversight has perpetuated a history of the Apostles that portrays them as misguided religious enthusiasts who quickly turned to violence in order to force their apostolic lifestyle on the unsuspecting medieval laity. As this dissertation argues, the Order did not foolishly seek to imitate the early apostles, but its members, including its founder, Gerard Segarelli, were instead part of larger orthodox trend among both the medieval laity and ecclesiastics who sought a more active role in religious life. By reexamining Salimbene's Cronica, the anonymous Historia Fratris Dulcini Heresiarche and Bernard Gui's De Secta Pseudo-Apostolorum , along with inquisitorial records, this study explores the message of poverty, penance and communalism that appealed to and attracted both women and men from various social classes to the Order. This study also disputes the commonly held belief that the Order, especially under its second leader, Fra Dolcino, was an actively violent apocalyptic group, first, by documenting the numerous instances where he and his followers consciously avoided conflict with episcopal and feudal authorities, and, second, by situating Dolcino and the Apostles within the larger framework of the tumultuous social and political climate of Valsesia, in northern Italy. This dissertation therefore reevaluates the Order of Apostles as more sophisticated and less violent than previously imagined.