INTENTION AND UNCERTAINTY AT LATER STAGES OF CHILDBEARING: THE UNITED STATES 1965 AND 1970; THE INTERGENERATIONAL TRANSMISSION OF RELIGIOUS BEHAVIOR: THE EFFECT OF PARENTS ON THEIR CHILDREN'S FREQUENCY OF PRAYER; PRAYER AND HAPPINESS 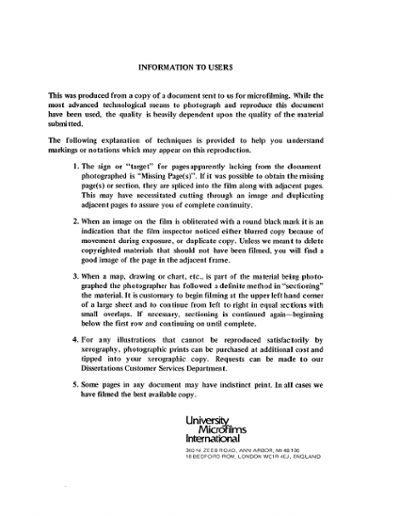 Part I. While births provide researchers with a natural dichotomy, fertility intentions are not inherently dichotomous. Intentions are predictions about the future and, as such, are couched in considerable uncertainty. Ignoring this uncertainty hides much of what could be learned from data on fertility intentions. This paper presents a model which allows analysis of the full range of intentions. After selecting a sample of women in the later stages of childbearing (women who intend less than two additional children) from the 1965 and 1970 National Fertility Studies, I show that: (1) substantial portions of women at this stage of the reproductive life cycle are indeed uncertain of their parity specific intention, (2) this uncertainty, like more firm intentions, varies by age and parity as my model predicts, and (3) there were significant shifts in the level of certainty between 1965 and 1970. Specifically, while intentions for third, fourth, and fifth births declined, more women "didn't know" if they intended to have another child or not. Among those not intending another child, more seemed uncertain of this intention in 1970 than did comparable women in 1965. In contrast, those intending another child seemed more certain in 1970. These changes in intentions and uncertainty suggest a need for caution in forecasting a decline in intended family size since this pool of uncertain women has the potential to increase the birth rate substantially. Part II. Adolescence brings into play forces which aid and hinder the intergenerational transmission of religious behavior. First, there is identification with parents and the inertia of childhood religious training. Secondly, a countervailing force is rebellious and assertive, and is aided by the American normative context of religious freedom. This analysis focuses on a net result of these forces--the correspondence between the prayerfulness of Catholic parents and their offspring in the period 1963 to 1974. Results indicate that parents strongly influence the frequency of their offspring's prayer. But the strength of the effect does vary significantly by the parent's sex, the adolescent's sex, and the nature of the parent's behavior (i.e. whether parents pray frequently, infrequently, or with moderate frequency). Over this period, however, there was great stability in the structure of religious socialization within the Catholic family. Observed marginal change indicates that the frequency of mothers' and daughters' prayer declined, and to a lesser extent, so did fathers' and sons' prayer. Importantly, the decline in adolescents' prayer does not indicate a lesser parental influence. Instead, parents seem less religious due, I argue, to the impact of the birth control encylical, Human Vitae. The adolescents' decline in prayer is evidence of an "echo" in the following generation. Part III. The modernization process and America's unique historical development caused changes in both the structure and function of American religion. The trend has been toward more individualized beliefs and "privatized" religious behaviors. The structure of this "privatized religion" seems capable of performing important functions in post-industrial society. Firm beliefs provide a sense of meaning and belonging in everyday life and allows answers to "ultimate questions". These beliefs can provide support in times of crisis. Finally, private religious behaviors can provide rewarding experiences in and of themselves. Using frequency of prayer as a measure of the intensity of "privatized" religious beliefs, I find that prayer is associated with greater happiness or psychological well-being. This effect is pervasive with respect to the respondent's sex and the Protestant-Catholic distinction. However, prayer most affects the happiness of those under 30 years of age and those over 50. This variation by age suggests that prayer is most important where institutional ties and support are weakest.