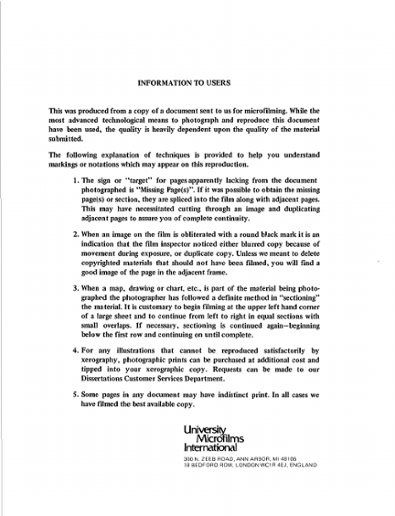 This study consisted of laboratory and greenhouse experiments designed to determine the effect of sulfur waste materials on acidulation and other properties of calcareous soils. The laboratory experiment was conducted in the Soils, Water and Engineering Department, University of Arizona, for a period of nine weeks. Laveen soil (containing 6% CaCO₃) was treated with two levels of Morocco rock phosphate (0, 500 ppm P), and two different waste materials of sulfur, Cake S and Foam S, each with three levels (0, 5000, 10000 ppm). Treated soils were incubated for two periods (three and nine weeks) at 27°C and 66% water holding capacity. The design of the experiment was a complete randomized block with 24 treatments and two replications. Data were evaluated by analysis of variance and multiple means comparison tests for soil pH, soluble phosphorus, and sulfate, and regression analysis for the isotherm. Results showed that Foam sulfur had a greater effect as compared with Cake sulfur on soil pH, soluble phosphorus and sulfate and significantly shifted the isotherm to the right. Rock phosphate had no effect on soil pH and sulfate, but tended to decrease soluble phosphorus and shifted the isotherm to the left as compared with the control. The second experiment was conducted in the greenhouse near the Agricultural Sciences Building, University of Arizona, for a period of 32 weeks starting on August 20, 1979. Two calcareous soils, Pima and Laveen, (2% and 6% CaCO₃, respectively) were investigated with three levels of rock phosphate (0, 250, 500 ppm P), and three sources of sulfur (Cake, Foam and pure sulfur) each at two levels (0, 8000 ppm S). Two levels of super phosphate were used as a standard treatment. The chemical treatments were mixed with the soil and transferred to plastic pots and moistened to 70% water holding capacity, then covered with plastic sheets and incubated for eight weeks. Following the incubation, tomatoes were planted and grown for a six week period. Dry weights were measured only in the Pima soil but were eliminated due to poor stand in the Laveen soil. Barley was planted after the tomato harvest. Tomato and barley plants were irrigated with distilled water until the first harvest, after which barley was irrigated with tap water and CaSO₄ saturated to eliminate sulfur deficiency detected prior to the first harvest. The experiment was a complete randomized block design with 36 treatments and three replications. Data for soils and plants were evaluated by analysis of variance, multiple means comparison test, and regression analysis. From the results of this study the conclusions were as follows: (1) Foam sulfur tended to increase soluble P and Zn, lowered soil pH, and shifted the P isotherm to the right in the soil. Plant P and dry weight were increased more by the Foam S than Cake S and pure sulfur. However, Foam S tended to increase soluble salts more than Cake S and pure S. (2) Cake S also caused an increase in soluble P in the soil, reduced soil pH, and increased plant P and dry weight as well, although the effects were less than with Foam S. (3) Rock phosphate plus sulfur resulted in an increase in soluble P after 32 weeks of application. (4) Soils with low CaCO₃ content, higher organic matter content, and higher cation exchange capacity favored increased oxidation of sulfur to sulfate resulting in increased soluble P and lower soil pH. (5) Linear regression analysis of the P sorption isotherm was carried out by plotting the P remaining in the solution (ppm) on the X-axis versis P sorbed by the soil (ppm); a linear power function resulted. By this relationship, any regression equation can be used to evaluate the P status of a soil and the statistical differences between treatments.