BEHAVIOR, POPULATION STRUCTURE, PARASITISM, AND OTHER ASPECTS OF COYOTE ECOLOGY IN SOUTHERN ARIZONA 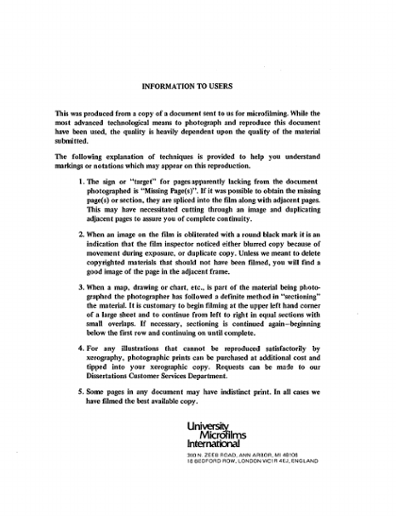 A study of the coyote in southern Arizona was initiated to gain insight into basic ecological relationships and to provide a basis for more detailed future studies. The behavioral portion of the study was conducted on the Santa Rita Experimental Range (SRER), where apparent minimum home ranges for 6 radio-tracked coyotes ranged in size from 0.5 to 7.9 square miles, and averaged 4.2 square miles. The relatively small home ranges may have reflected high coyote density and abundance of food during the period of study. Females tended to occupy larger areas than did males. Home ranges appeared to be a composite of foraging ranges, each of which had its own center of activity. Generally home ranges exhibited the property of linearity. Coyotes typically became active before dusk and remained so until midmorning of the following day, with cooler weather extending activity periods. Based upon annuli counts from canine teeth of 378 coyotes, the age distribution within the general population was as follows: 0-1 year old, 32.8%; 1-2, 14.3%; 2-3, 15.3%, 3-4, 12.2%; 4-5, 11.4%; 5-6, 5.0%; and over 6 years, 9.0% of the sample. The average age was 3.2 years (s.d. 2.4), with one animal reaching just under 14 years of age. Subsamples representing different years, causes of death, and counties had significantly different age class distributions. Also, coyote age class structures from various regions of North America exhibited highly significant variations. Of 273 known-sex coyotes, the ratio was 154 males: 119 females. Males tended to outlive females; for coyotes over 5 years of age males significantly outnumbered females. The control practices of trapping and poisoning killed a highly significant majority of male coyotes. Hypothetically, disproportionate sex ratios were part of a mechanism whereby coyote populations maintained a balance with their environment. Reproductive tracts from 22 males and 20 females were examined. Males produced spermatozoa from January to June. There was no evidence of breeding among juvenile females. Over 100 coyote specimens were examined for parasites. Information on the occurrence of ectoparasites tended to be of qualitative value. The species identified were Pulex simulans, Echidnophaga gallinacea, Thrassis arizonensis, Heterodoxus spiniger, and Otobius megnini. The 15 species of helminths recovered consisted of 5 cestodes, including Taenia pisiformis (56% infection rate), T. multiceps (22%), T. macrocystis (6%), T. hydatigena (1%), and Mesocestoides sp. (6%); 8 nematodes, including Ancylostoma caninum (38%), Filaroides osleri (3%), Toxascaris leonina (43%), Physaloptera rara (51%), P. sp. (1%), Rictularia cahirensis (3%), Mastophorus numidica (1%), and Dirofilaria immitis (2%); and 2 acanthocephalans, including Oncicola canis (46%) and Pachysentis canicola (1%). Pups and females were subject to greater collective endoparasite burdens. Variations in incidence and intensity of infection were also noted with year, season, and county. A general picture of food habits was obtained by examining 101 coyote stomachs. By percentage of overall volume, stomach contents were: larger mammel, 25.4%; smaller mammal, 35.0%; bird, 16.4%; reptile, 0.1%; invertebrate, 6.4%; and vegetable matter, 16.2%. Much of the larger mammal material was carrion. Statistical analyses revealed that there were significant differences in the diets of pups and females versus adults and males, respectively, while variations in diet between years, seasons, and counties did not appear significant. By percentage of organic weight, contents of 619 coyote scats from the SRER were: larger mammal, 15.8%; smaller mammal, 49.9%; bird, 0.8%; reptile, 0.2%; insect, 5.4%; and vegetable matter, 27.9%. Variations in recovered weights of the major food categories between seasons were highly significant. The proportion of native fruits and insects in the scats increased greatly in summer and fall, and appeared responsible for moderating predation upon smaller mammals for several months.