PERCEPTIONS AND REPORTED BEHAVIORS OF PARTICIPANTS IN A TEACHER STRIKE 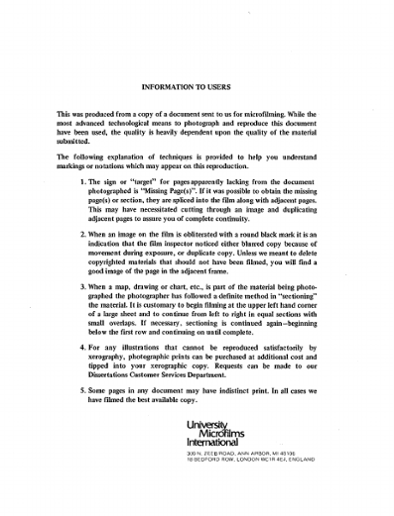 This study focused on a 1978 teacher strike in the Tucson Unified School District, Pima County, Arizona, and was designed to explore patterns of perceptions and behaviors reported by teachers concerning their involvement in the strike. Teacher perceptions and behaviors were examined in terms of: viewpoints concerning the issues and causes of the strike; attitudes toward the act of striking; choice to either strike or not to strike and the differeing factors which may have influenced the strike decison; feelings of stress occasioned before, during, and after the strike; post-strike relationships with significant others in the school system; and feelings regarding the outcomes of the strike. To implement the research study, a questionnaire was developed to explore teacher attitudes, viewpoints, and reported behaviors regarding various aspects of the strike. The questionnaire was distributed by the Tucson Education Association through the Tucson Unified School District mail distribution system to all 2,751 teachers of the school district. A total of 1,728 teachers participated in the study by completing and returning the questionnaire, which represents approximately 63 percent of the population. Data for the study were derived from the questionnaire responses. The demographic data and strike behavior data were crosstabulated and their significance reported in terms of chi-square statistics. The chi-square indicated a significant relationship between teacher strike behavior and the following demographic variables: teaching level, age, sex, teacher tenure, total years teaching, membership in a professional organization, and spouse being a teacher in the district. Data regarding teacher perceptions and behavior were analyzed and summarized on the basis of the perceptual framework constructed for this study, which was drawn from the literature in social and perceptual psychology. Briefly it included the following five categories: Empathy; Acceptance; Stress; Adequacy; and Perceptual Framework. The following perceptions were reported by teachers regarding: Issues and Causes of the Strike: The reported issues of the strike were salary, discipline, fringe benefits, class size, teacher professionalism, and dignity. The teachers reported that the factors generating the strike were not the issues themselves, but rather the way the issues were handled by the school board, superintendent, and central administration. Influences Upon Strike Behavior: The greatest influence reported by teachers regarding their strike decision was the teachers' association, followed by teachers in their own schools, family, teachers outside their schools, the media, and building principal, in that order. Strike Stresses: Ninety percent of all respondents reported experiencing stress during the strike. Stress was greater among elementary teachers, female teachers, and non-striking teachers. Post-Strike Relationships: Teachers reported more harmonious relationships with fellow teachers and students in their schools following the strike. Teachers reported less harmonious relationships with their supervisors. Strike Perceptions: Teachers reported that the strike produced a greater sense of personal dignity for teachers. The recommendations of the study included the following: A school system should develop and maintain a deep philosophical commitment to the worthiness and dignity of all persons. A continuous and effective communication process should be developed whereby school district administrator and teacher representatives can meet and interact in an atmosphere where every person is encouraged to express his viewpoints. Teachers and school district officials should have an adequate set of board-adopted policies providing orderly processes for dealing with disputes and difference between them. The policy that is adopted should result from the widest possible participation of all concerned groups throughout the community and the school district. The school district, including the school board, administrators, and teaching staff should carefully plan and effectively implement a program for continuous improvement of human relationships throughout the district.