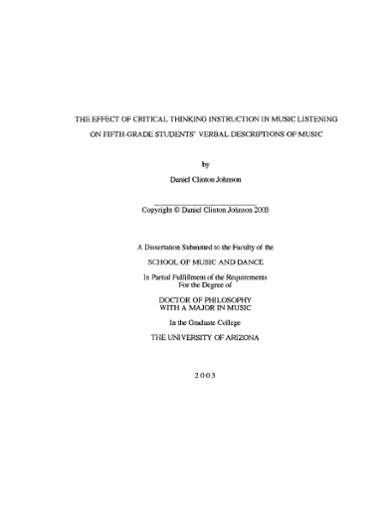 The purpose of this study was to determine the effect of critical thinking instruction on the music listening skills of fifth grade students as measured by written responses to music listening examples. It was hypothesized that music listening instruction including opportunities for critical thinking (Critical Thinking Instruction, CTI) would be more effective than parallel instruction without critical thinking instruction (Activity-Based Instruction, ABI). CTI consisted of four components: musical terms and concepts, repeated music listening examples, responding activities, and opportunities for critical thinking. In contrast, ABI consisted of three components: musical terms and concepts, repeated music listening examples, and responding activities; ABI did not include opportunities for critical thinking. Both CTI and ABI treatments were taught concurrently by the same music teacher at the same school in a series of sixteen (16) forty-five (45) minute lessons. Two intact classes of subjects were randomly assigned to the CTI and the ABI treatment groups (n = 41 and 40, respectively). "Thinking and Listening," a researcher-designed dependent measure, was administered as a pretest and a posttest. Subjects' written responses were classified into three categories (i.e. musical, affective, or associative) and scored by three independent judges. Additionally, the Musical Aptitude Profile (Gordon, 1967/1995) was administered as a covariate. Significant disordinal interaction effects in subjects' responses by test by treatment were found such that CTI subjects demonstrated greater gains in musical term, associative, and total response scores from pretest to posttest than did ABI subjects. Additionally, significant main effect differences between treatment groups were found such that CTI subjects demonstrated higher musical term, affective, associative, and total response scores than did ABI subjects. Significant main effect within group differences were also found such that CTI subjects demonstrated significantly higher musical term, affective, associative, and total response scores on the posttest as compared to the pretest, while no significant main effect differences were found in ABI subjects' response scores. The positive effects of the CTI treatment, however, should be interpreted with caution based on larger than expected standard deviations and departures from normal distributions. Implications include designing music listening instruction to incorporate critical thinking skills.