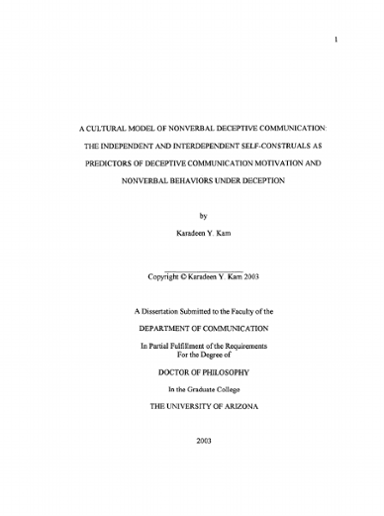 Findings from a host of prior cross-cultural studies suggest that those of differing cultural orientations are likely to possess differing motivations for deceiving and truthtelling, and as a consequence, are likely to exhibit differing patterns of behavior when engaging in deceptive communication. Thus, this investigation examined: (a) the impact of cultural identity on one's motivation for deceptive communication, and (b) the impact of cultural orientation on overt manifestations of behavior. In addition, this study investigated the effects of culture and relational familiarity (i.e., strangers versus friends) on truth bias and deception detection accuracy. To test the proposed theoretical relationships, participants from two cultures (i.e., United States and Japan) were employed in an experimental study. Results of the current investigation revealed that degree of independence was the single best predictor of one's motivation to tell the truth and one's motivation to protect the self, whereas degree of interdependence was the best predictor of one's motivation to protect the other. In terms of deceivers'/truthtellers' perceptions of the self under deception, higher interdependence scores were found to be related to self-perceptions of less positive affect, less fluency, and less psychological involvement under truth conditions, but were associated with greater positive affect, greater fluency, and more psychological involvement under conditions of deception. When considering partner perceptions of truthtellers'/deceivers' behavior, higher degrees of independence were found to be associated with less positive affect under deception. When outside-observers viewed the behaviors of truthtellers/deceivers, higher degrees of independence were found to be associated with greater kinesic involvement and pleasantness, less nervousness, and greater vocal pleasantness and vocal relaxation under truth. Conversely, higher scores on independence were found to be related to less kinesic involvement, less pleasantness, greater nervousness, and less vocal pleasantness and vocal relaxation under conditions of deception. Finally, relationship type was not found to be a significant predictor of either accuracy or truth bias, although, higher degrees of interdependence were associated with lower detection accuracy and greater truth bias. The findings of the current investigation strongly suggest that behavioral differences indeed become manifest when research is conducted employing samples of varying cultural orientations.