THE HOUSE OF THE IMAGINED PAST: HAWTHORNE, DICKENS, AND JAMES 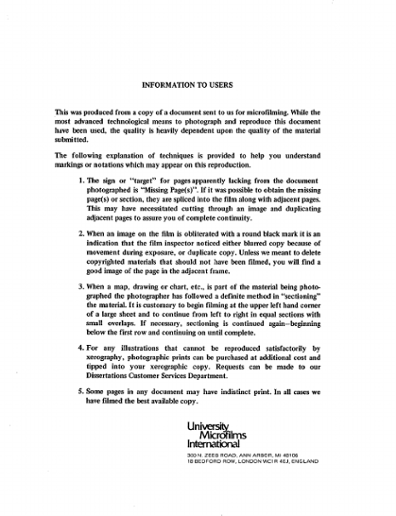 This dissertation deals with the symbolic uses of the prominent old houses in selected fiction of Nathaniel Hawthorne, Charles Dickens, and Henry James. The major texts include Hawthorn's "Peter Goldthwaite's Treasure," The House of Seven Gables, and Doctor Grimshawe's Secret; Dicken's Bleak House, Great Expectations, and Little Dorrit; and James's The Portrait of a Lady, "The Jolly Corner," and The Sense of the Past. The introductory chapter of the dissertation points out the importance of the house in nineteenth-century fiction. To a century which was obsessed with time and particularly fascinated by the past, the house could serve as a literary symbol of the past and aid in the investigation of the relation of a character to the past he has experienced and the past he remembers with various degrees of accuracy. For Hawthorne, Dickens, and James the house is always more than inanimate space. It is linked by imagination and memory to the past. Chapter II identifies and defines the house of the imagined past. The house has a name and a long history which illuminates the present situation of the inhabitants. All three authors draw freely from the gothic tradition to fill the houses with old relics, curses, secrets, sins, and treasures from the past. Seeking the treasure--hidden gold in some cases, self-knowledge in others--the characters keep the past alive in their old houses. The character in the house of the imagined past is often fragmented because he does not understand or accept his relation with his own past. Time inside the house of the past is arbitrary. The past, or certain imagined or remembered portions of it dominate the space. Chapter III concerns the functions of the house. First, the actual fact of the house's existence generates action in the works. Second, the physical relation to his house suggests aspects of the character's spiritual state. The characters search and probe, even assault their houses, seeking themselves. Third, all three authors continually emphasize parallels between houses and people. Characters voluntarily imprison themselves in their houses just as they willingly imprison themselves in their interpretations of the past. The house also suggests that the past lives into and influences the present by means of heredity and environment. In addition, the physical state of the house mirrors the spiritual state of the characters: morally sick people inhabit decaying houses. Even further, houses become animated, metonymic representations of their inhabitants. The house of the past, then, projects or represents the character's mind. In Chapter IV I deal with the final return to and departure from the house of the imagined past. Finally the characters recognize the imprisoning nature of their obsessions and can then leave the house of the past or as happens in many cases, can be rescued by a woman who lives in the present. Hawthorne's characters turn their backs on the past with relief and turn to the present. Dickens's characters must know the past, accept it, and build on it, not simply turn away as Hawthorne's characters do. James allows his characters to close the door of the house of the past behind them if they can find love in the present. If domestic happiness is impossible, however, the broad human past can offer imagined solace and relief. The final chapter points out that Hawthorne, Dickens, and James, like many other authors, recognize archetypal and psychological relationships between a human and the space he inhabits. They use the house to understand the self, especially in relation to the past.