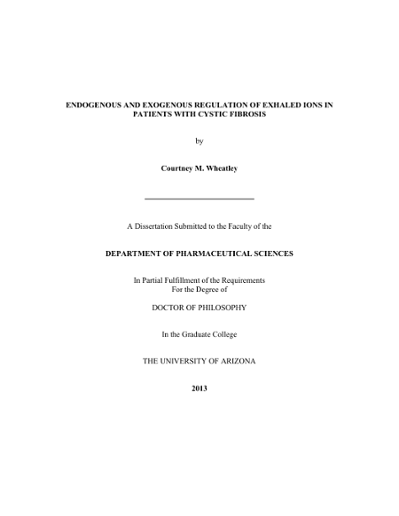 Exercise has become a vital component of the therapy regimen prescribed to cystic fibrosis (CF) patients due to its systemic benefits, such as increased sputum expectoration, attenuation of the expected 2-3% annual decline in pulmonary function, and extended life expectancy. However, exercise still is not viewed as being as beneficial as pharmacological treatments by many CF patients and can be intimidating. My aims in this study were two-fold; first, to determine the ideal exercise intensity for individuals with CF; and second, to determine if exercise at this ideal intensity could provide improvements in ion regulation in the lungs, which was measured using exhaled breath condensate (EBC) collection and nasal potential difference (NPD), that were comparable to one of their standard pharmacological therapies, albuterol. I hypothesized that with moderate intensity exercise, Na⁺ absorption would decrease from baseline due to Na⁺ channel inhibition, rather than increase or remain unchanged, as was expected with albuterol, and cause an even greater increase Cl- secretion compared to albuterol due to activation of both CF-dependent and independent Cl- efflux with exercise. CF (n=14) and healthy (n=16) subjects completed three visits, a baseline screening and two treatment visits. I collected EBC at baseline, 30- and 60-minutes post-albuterol administration on one visit, and at baseline and during three separate 15 min exercise bouts at low, moderate and high intensity on the other visit. Following the EBC collection, NPD was performed at 30- and 80-minutes post albuterol or following moderate and high intensity exercise. We also measured spirometry and diffusing capacity of the lungs for nitric oxide (DLNO) during each visit at the various time points. In CF subjects, moderate intensity exercise resulted in greater improvements in DLNO (39 ± 29vs.15 ± 22% change from baseline, exercise vs. albuterol respectively), similar levels of bronchodilation compared to 60-minutes post-albuterol administration, no change in Na⁺ absorption, and a four-fold increase in Cl- secretion. Our results suggest that moderate intensity exercise is the best dose for CF patients, and can provide comparable changes as its pharmacological counterpart albuterol, when compared over a short term duration.