Anza: Analyzing 18th Century Lifeways of Anza Expedition Members in Northwestern Sinaloa and Southwestern Sonora Mexico
JavaScript is disabled for your browser. Some features of this site may not work without it. 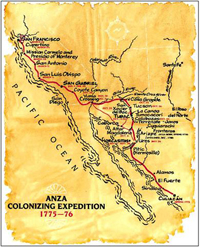 This National Park Service funded study is intended to contribute to a largely empty space on a topic that is otherwise well understood and documented. At the request of the superintendent of the Juan Bautista de Anza National Historic Trail (NPS 2010), a team at the University of Arizona (School of Anthropology, Bureau of Applied Research in Anthropology) was asked to provide ethnographic and ethnohistorical information to interpret and define the preexisting lifeways of the people who settled San Francisco. These settlers or founders, as they are variously referred to in this report, were selected, organized, educated, and guided to the new settlement (which would become San Francisco) by Juan Bautista de Anza (Anza) who was the son of a father by the same name.

This study is humbled by the volumes of information that have already been developed by scholars and others who have been intrigued by this event. Past studies include the massive five volumes by Bolton (1930) on Anza’s expeditions to California, multiple diaries from the expedition to San Francisco and his previous scoping trip, creative document-based interpretative histories of the event, archaeological studies of the early settlement at San Francisco, and the oral histories and family documents of descendants many of who today participate in Anza focused societies and web sites. In other words, the superintendent of the Juan Bautista de Anza National Historic Trail (JUBA) had the vision to find a place for new voices in what otherwise seemed to be a completed story.

The lifeways (material and non-material culture) of the settlers or founders of San Francisco are important to contemporary interpretations of the expedition and the adaptations which subsequently occurred because these would be the basis on which the new community would be established and the reasons why it would become a success. Failure to establish a viable community was a clear possibility due to a wide range of threat factors including (1) differences in climate and ecology, (2) chance of starvation, (3) potential conflicts with local American Indian people, (4) emergence of factions among the founders, and (5) the simple inability of the community to sustain itself—a synergetic factor that could derive from interactions between any of the previously listed factors and the appearance of unanticipated causes like diseases, attacks from Russians or distant Indian peoples, and even the emergence of ontological insecurity.

The researchers associated with this report found it useful to attempt to place themselves in the lives (some would say shoes) of the people who would accept the request from Anza to settle a new community in what was, at the time, a largely unknown land. This study is especially focused on why Anza selected potential founders, why founders would have gone on this settlement journey, and what lifeways the founders would have carried with them—mostly in their heads. We argue here that Anza chose people with lifeways and personal traits that would have been able to face his perceived challenges or threats to the success of this settlement. This was a spectacular expedition, more comparable to what it would be for us today to consider going to Mars than it was like the challenges associated with founding other frontier settlements in northern New Spain.

Special Note: Dr. Henry Farmer Dobyns, a widely recognized expert on the history and prehistory of the Southwest, was a co-Principal Investigator on this study of the 18th Century Lifeways of the Anza Expedition Members. He passed away shortly after this study was completed. Dr. Dobyns’ contribution to this report and to the overall structure of the study was invaluable and he is missed by our study team and the applied anthropology and ethnohistory scholarly communities. This report thus marks the final contribution of this influential scholar after a lifetime of research on the subject. Most of his publications are available through the University of Arizona library. The University of Arizona Special Collections, however, has archived his southwest research papers, which are indexed with a finding aid. &nbsp; A summary of his life and work is provided as a part of this collection posted below – it is called A Tribute to Henry Dobyns.