Greater-Than-Class C Low-Level Radioactive Waste EIS
JavaScript is disabled for your browser. Some features of this site may not work without it. 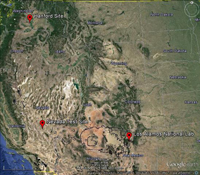 There is a history of formal government-to-government consultation at Hanford, Los Alamos National Lab, and the Nevada Test Site, so this was a foundation of involving tribal governments and their representatives at each of these DOE facilities. At the remaining facilities either the DOE did not believe there were culturally affiliated tribes or the tribes decline to participate in the GRCC PEIS.

GTCC LLRW is defines as needing special isolation because it exceeds the concentration limits of radionuclides for LLRW established by Congress. GTCC is generally generated by National Labs but is comes from power plants and medical facilities. It is generally classified as (1) activated metals, (2) sealed sources, and (3) other wastes.

Richard Stoffle (Professor, School of Anthropology, University of Arizona) and Richard Arnold (Chairman, Pahrump Paiute Tribe) were contracted by the Washington, DC Office of the Environmental Management who headed up the PEIS. Both Stoffle and Arnold had extensive experience creating settings for tribes to quickly participate in Environmental Impact Assessments so that tribal concerns could be considered in an EIS. Stoffle and Arnold had previously worked with the tribes at Hanford, Los Alamos, and the NTS. Arnold was the official spokesperson for the consulting tribes at the NTS, who call themselves the Consolidated Group of Tribes and Organizations. Stoffle and Arnold were to create a participation setting and facilitate the production of text that was reflective of the tribal concerns.

Representatives of all potentially involved tribes were provided with an orientation to the GTCC PEIS study and provided time to discuss the opportunity with their tribal governments deciding whether or not to participate. Participation of tribal representatives involved funds provided by the DOE. All participating tribes provided text for inclusion into the PEIS. A tribal condition of participation was that tribal text could neither be edited nor summarized by the DOE, but instead what the tribal governments approved would be directly added to the GTCC PEIS. This stipulation was agreed to by the DOE and at each facility the consulting tribes wrote text that was subsequently included in the final PEIS.

A special feature of the negotiations to participate was that tribes would have the right to provide evaluations of any aspects of environmental assessment. Often tribes are limited to cultural resource responses and denied the right to comment on others aspects of the assessment.