The Biological Role of Fruit Phenolics, Sedentary Behavior, and Inflammation on Colorectal Neoplasia 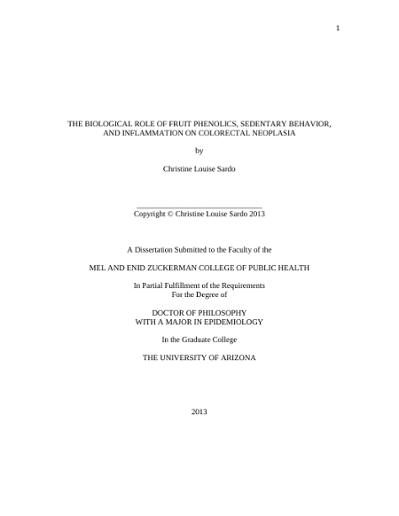 Background: Clinical and epidemiologic studies have investigated the effects of diet, physical activity, and inflammation on the risk of colorectal adenoma occurrence and recurrence. Inflammation has been proposed as a mechanism of action for the development of colorectal adenoma and cancer. Research indicates that fruit phenolic exposure may attenuate the inflammatory response and some data suggest that berries are effective in mitigating this process. Inflammatory cytokines such as interleukin-6 (IL-6), C-reactive protein (CRP), and tumor necrosis factor alpha (TNF-α) are of particular interest due to their role in adenoma development. Epidemiological investigations have studied the association between bioactive fruit phenolic compounds and colorectal neoplasia; however, epidemiological data for the association between consumption of berries, which contain high concentrations of these compounds, and colorectal adenoma recurrence are limited. In addition to a potential role of phenolics in reducing inflammation, physical activity has also been proposed as a mitigator of this process. Numerous studies have investigated the association between physical activity and colorectal neoplasia, yet data on sedentary behavior and colorectal adenoma recurrence are limited. This dissertation was designed to further elucidate the role of fruit phenolics and sedentary behavior on colorectal adenoma recurrence and to specifically highlight the potential role of black raspberries in mitigating the postprandial inflammatory response among overweight and obese individuals. Methods: Ten overweight or obese males (BMI>25 kg/m²), ages 55-72, participated in an open-label, randomized, 14-day, pilot crossover study. Subjects consumed a high- fat, high- calorie (HFHC) meal, with (Group 1) or without (Group 2) a 5 day regimen of 45 g of black raspberry powder in the form of a slurry. The study included a two-day washout period before Group 1 and Group 2 were crossed over. The two-day washout period was based on a pharmacokinetic study conducted with black raspberry powder (1); peak plasma concentrations of ellagic acid and anthocyanin metabolites peaked at 1 to 2 hours following consumption of 45 grams of black raspberry powder and by 12 hours, plasma concentrations of these metabolites were almost fully washed out, with plasma concentrations returning to near baseline levels. Blood samples were obtained prior to consumption of the HFHC breakfast and at 1, 2, 4, 8, and 12 hours afterwards, during two 14-hour clinic visits. The primary study outcomes were changes in areas under the curves (AUCs) of serum biomarkers of TNF-α, CRP, and IL-6. A secondary pooled analysis was conducted among participants from two randomized, double blind, placebo-controlled Phase III clinical trials to investigate the association between berry consumption and colorectal adenoma recurrence, and the association between sedentary behavior and colorectal adenoma recurrence. Analyses included 2,502 subjects who had completed the baseline Arizona Food Frequency Questionnaire to ascertain berry consumption history in the past year and 1,730 men and women who had completed the baseline Arizona Activity Frequency Questionnaire to ascertain sedentary behavior. All subjects had a follow-up colonoscopy during the trial. Logistic regression modeling was employed to estimate the effect of sedentary behavior or berry consumption on colorectal adenoma recurrence. Results: The mean AUC of serum IL-6 was significantly lower (p=0.03) with black raspberry (BRB) feeding (45.5±36.3 pg/mL; mean±SD), compared to high fat, high calorie meal alone (56.7±50.0 pg/mL). No statistically significant differences were observed in the mean AUC of serum TNF-α or CRP. In the pooled analysis, no significant associations were observed between berry consumption and adenoma recurrence in the pooled population or when stratified by sex. In the evaluation of association between sedentary behavior and adenoma recurrence, subjects in the second, third, and fourth quartiles of sedentary behavior experienced higher odds of adenoma recurrence; however, the difference was only statistically significant for the third quartile. Sex-stratified analyses revealed that in men, sedentary activity was statistically significantly associated with 45% higher odds of adenoma recurrence. Compared to the lowest quartile of sedentary activity, the ORs (95% CIs) for the second, third, and fourth quartiles among men were 1.31 (0.93, 1.84), 1.47 (1.04, 2.09), and 1.45 (1.02, 2.06) respectively (P trend=0.03). In contrast, no association with sedentary activity was observed in women. Conclusion: Polyphenol exposure in the form of a black raspberry slurry significantly decreased post-prandial IL-6 in a clinical trial among ten older overweight and obese men. These findings suggest short-term attenuation of an inflammatory maker may not translate to decreased adenoma recurrence, however, long term randomized clinical trials with black raspberries are needed to evaluate this further. However, in an epidemiological analysis, consumption of up to 1 cup per week of whole berries was not associated with lower odds for adenoma recurrence among a pooled population of participants in the Wheat Bran Fiber and Ursodeoxycholic Acid Phase III clinical trials. While the epidemiological results indicated that berry consumption are not associated with the development of early colorectal neoplasia, the effects on later stages of carcinogenesis are unknown. Higher levels of berry consumption may be required in order to reach a cancer inhibitory effect. Finally, results of the physical activity study suggest that sedentary behavior is associated with a higher risk of adenoma recurrence among men, providing evidence of detrimental effects of a sedentary lifestyle early in the carcinogenesis pathway. Efforts to further evaluate these findings in other cohorts or in an intervention trial should be considered.