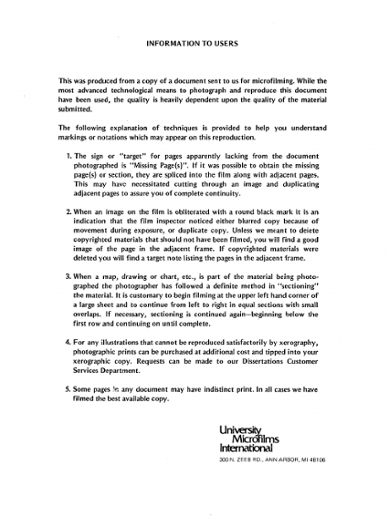 This study was designed to discover, using an interview technique, patterns in perceptions of self, teaching context, and relationships between the two, of selected teachers in alternative secondary education programs. A theoretical framework derived from perceptual psychology was used as the basis of the interview schedule and the analyses of responses. An interview schedule was developed and field-tested prior to use in the study. Teachers from three metropolitan school districts in 10 alternative programs were contacted by letter asking for volunteers. Most of the programs were designed for disaffected students. Twenty-three teachers were interviewed by the investigator. Tape-recorded responses to the questions were analyzed in two ways according to selected concepts from perceptual psychology. In the first analysis, questions analyzed for perceptions of self, context, and the relationships between the two generated responses from which patterns seemed to emerge. Patterns in perceptions of self indicated that teachers focused on the importance of satisfying needs, of total life experiences, and of personal freedom in their work. Patterns in perceptions of context, i.e., alternative secondary education programs, showed that teachers focused on the importance of education as process and of dealing with students as individual persons. They advocated changes in traditional programs in these directions. Patterns in perceptions of relationship between self and context suggested that teachers focused on a personal and positive interaction between themselves and their work while being aware of inherent limitations and hindrances. In the second analysis, patterns analyzed for characteristics of perceptual field and the adequate self yielded the following findings ranked in order of expressed importance. First, perceptual field characteristics which emerged were: direction (87% of responses), and fluidity (58% of responses). Stability, resistance to change, did not seem to emerge. Teachers demonstrated prominently their awareness of satisfying needs, their own and their students', indicating the direction of their perceptual field. This awareness was followed by a less prevalent but still noteworthy readiness to change their methods and behaviors, fluidity of field, in order to accomplish their goals. Perhaps the prevalence of these two characteristics explains the absence of the characteristic of stability. Second, characteristics of the adequate self which emerged were: possession of rich and available perceptual field (94% of responses), openness to experience (90% of responses), positive self-perceptions (68% of responses), and capacity to identify with others (47% of responses). The teachers' responses indicated that they drew on past experiences and were open to new ones in order to function in their work. Their view of themselves was positive. Capacity to identify with others was the least evident. Four teachers emerged as having some atypical perceptions. They worked in two programs, one designed for academically able students and the other for senior students seriously interested in pursuing professional careers. This group perceived content as having more prominence than process and considered their role to be more similar to that of traditional teacher and academic counselor. Conclusions based on perceptions of these teachers were as follows: First, teachers tended to be person-oriented, aware of their own and students' needs. Second, teachers appeared to be process-oriented, favoring educational alternatives so that more students be educated. Third, teachers seemed aware of the total context of their work, the gratifying dimensions as well as the limitations. Fourth, teachers accented person and process in responses indicating the characteristics of direction and fluidity in their perceptual field. Fifth, teachers appeared to demonstrate two characteristics of the adequate person, openness to experience and possession of a rich perceptual field, lightly more than others.