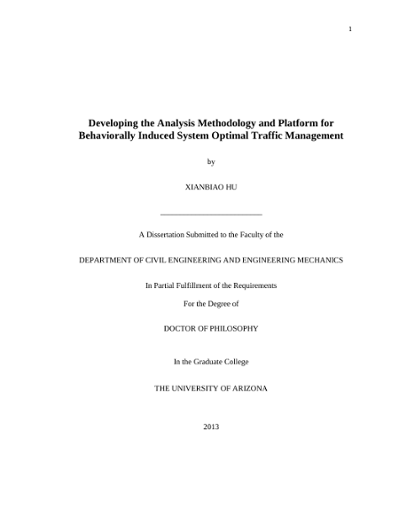 Traffic congestion has been imposing a tremendous burden on society as a whole. For decades, the most widely applied solution has been building more roads to better accommodate traffic demand, which turns out to be of limited effect. Active Traffic and Demand Management (ATDM) is getting more attention recently and is considered here, as it leverages market-ready technologies and innovative operational approaches to manage traffic congestion within the existing infrastructure. The key to a successful Active Traffic and Demand Management strategy is to effectively induce travelers' behavior to change. In spite of the increased attention and application throughout the U.S. or even the world, most ATDM strategies were implemented on-site through small-scale pilot studies. A systematic framework for analysis and evaluation of such a system in order to effectively track the changes in travelers' behavior and the benefit brought about by such changes has not been established; nor has the effect of its strategies been quantitatively evaluated. In order to effectively evaluate the system benefit and to analyze the behavior changes quantitatively, a systematic framework capable of supporting both macroscopic and microscopic analysis should be established. Such system should be carefully calibrated to reflect the traffic condition in reality, as only after the calibration can the baseline model be used as the foundation for other scenarios in which alternative design or management strategies are incorporated, so that the behavior changes and system benefit can be computed accurately by comparing the alternative scenarios with the baseline scenario. Any effective traffic management strategy would be impossible if the traveler route choice behavior in the urban traffic network has not been fully understood. Theoretical research assumes all users are homogeneous in their route choice decision and will always pick the route with the shortest travel cost, which is not necessarily the case in reality. Researchers in Minnesota found that only 34% of drivers strictly traveled on the shortest path. Drivers' decision is made usually based on several dimensions, and a full understanding of the travel route choice behavior in the urban traffic network is essential. The existence of most current Advanced Traveler Information Systems (ATIS) offer the capability to provide pre-trip and/or en route real time information, allowing travelers to quickly assess and react to unfolding traffic conditions. The basic design concept is to present generic information to drivers, leaving drivers to react to the information their own way. This "passive" way of managing traffic by providing generic traffic information has difficulty in predicting outcome and may even incur adverse effect, such as overreaction (aka herding effects). Furthermore, other questions remain on how to utilize the real-time information better and guide the traffic flow more effectively towards a better solution, and most current research fails to take the traveler's external cost into consideration. Motivated by those concerns, in this research, a behaviorally induced system optimal model is presented, aimed at further improving the system-level traffic condition towards System Optimal through incremental routing, as well as establishing the analysis methodology and evaluation framework to calibrate quantitatively the behavior change and the system benefits. In this process, the traffic models involved are carefully calibrated, first using a two-stage calibration model which is capable of matching not only the traffic counts, but also the time dependent speed profiles of the calibrated links. To the best of our knowledge, this research is the first with a methodology to incorporate the use of field observed data to estimate the Origin-Destination (OD) matrices departure profile. Also proposed in this dissertation is a Constrained K Shortest Paths algorithm (CKSP) that addresses route overlap and travel time deviation issues. This proposed algorithm can generate K Shortest Paths between two given nodes and provide sound route options to the drivers in order to assist their route choice decision process. Thirdly, a behaviorally induced system optimal model includes the development of a marginal cost calculation algorithm, a time-dependent shortest path search algorithm, and schedule delay as well as optimal path finding models, is present to improve the traffic flow from an initial traffic condition which could be User Equilibrium (UE) or any other non-UE or non-System-Optimal (SO) condition towards System Optimal. Case studies are conducted for each individual research and show a rather promising result. The goal of establishing this framework is to better capture and evaluate the effects of behaviorally induced system optimal traffic management strategies on the overall system performance. To realize this goal, the three research models are integrated in order to constitute a comprehensive platform that is not only capable of effectively guiding the traffic flow improvement towards System Optimal, but also capable of accurately evaluating the system benefit from the macroscopic perspective and quantitatively analyzing the behavior changes microscopically. The comprehensive case study on the traffic network in Tucson, Arizona, has been conducted using DynusT (Dynamic Urban Simulation for Transportation) Dynamic Traffic Assignment (DTA) simulation software; the outcome of this study shows that our proposed modeling framework is promising for improving network traffic condition towards System Optimal, resulting in a vast amount of economic saving.