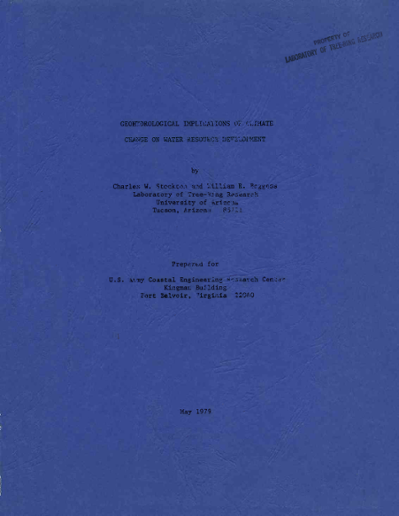 One of the basic assumptions in hydrology is that hydrologic time series are stationary in the sense that the probability distribution of a series can be determined from a finite sample and that it will not change with time. This assumption implies that climate which is an integral part of all hydrologic series is stationary with time. The fact is that climate is nonstationary and this non-stationarity varies from region to region. The objective of this study is to evaluate the known physical state of hydrologic processes in each of the 18 Water Resource Regions for the conterminous United States as outlined by the Water Resources Council and to speculate on the response of the system to superimposed climate variability. Four climate scenarios are evaluated encompassing all combinations of a 2 °C change in mean annual temperature with an accompanying 10 percent change in total annual precipitation. The technique used involves estimated change in mean annual runoff with respect to that of the present using empirically developed curves that relate weighted mean annual temperatures to mean annual precipitation and runoff. An evaluation of presently available models and techniques for incorporating climate variability into synthetic hydrologic traces is also discussed. Tree-ring data series are mentioned as a possible way of investigating regional climatic variability on hydrologic responses. The region-by-region evaluation of climatic change impacts indicates that a change toward a warmer and drier climate (scenario 1) would have the greatest effect on a nation-wide basis. These effects are largely adverse and the most severe impact would be in the water deficient regions west of the Mississippi River. In contrast, mostly beneficial effects would accrue from a change to cooler and wetter conditions (scenario 2). The greatest positive effects would be in the dry western regions; some negative effects would result from increased flooding on most major river systems and their tributaries, especially eastward from the Missouri and Mississippi Rivers. The effect of warmer and wetter (scenario 3) and cooler and drier (scenario 4) climatic variations on annual runoff are conjectured to be trivial in most regions. Only in the Upper Colorado River Region did scenario 3 prove to be non-trivial on a region wide basis. Our impact analysis indicates all regions would be adversely affected by a warmer and drier climatic change. In one region, the South Atlantic -Gulf, the impact is considered negligible. The adverse impacts were considered minor in the New England, Ohio, Souris-Red-Rainy, Great Basin, Pacific Northwest, and Lower Mississippi Regions. Moderate impacts are postulated for the Mid-Atlantic, Great Lakes, Tennessee, and Upper Mississippi. Major changes in the response of the water resources system are postulated for the Arkansas-White-Red, Texas Gulf, Rio Grande, Upper Colorado, Lower Colorado, California and Missouri Regions. Even under warmer and drier conditions, total runoff from the Pacific Northwest Region is greater than the present combined total annual runoff from the California, Great Basin, Lower Colorado and Upper Colorado Regions. In fact, the Pacific Northwest Region is the only region in the western United States that presently appears to have a water supply surplus. For a cooler and wetter climatic variation (scenario 2) adverse effects are predicted for some regions, although the national impact would be mostly beneficial. Adversely affected regions are the South Atlantic-Gulf, the Lower Mississippi and the Great Basin. The remaining fifteen regions would be beneficially affected, although the New England, Mid-Atlantic, Great Lakes, Souris-Red-Rainy and the Pacific Northwest Regions fall into the negligible category. An apparently beneficial impact would be felt by the Ohio, Tennessee, Upper Mississippi, Missouri, Upper Colorado, Arkansas-White-Red, Texas Gulf, Rio Grande, Lower Colorado and California Regions, although there would be increased flooding in five of these. Several regions where water is currently abundant with respect to demand, would experience only negligible or minor impacts regardless of whether warmer and drier (scenario 1) or cooler and wetter (scenario 2) climatic variations would occur. These include New England, South Atlantic-Gulf, Ohio, Souris-Red-Rainy, Great Basin and Pacific Northwest. The effects of the postulated climatic changes on the total water reserve is shown by comparing the ratios of regional total reservoir capacity to mean annual runoff for the present and for warmer and drier (scenario 1) and cooler and wetter (scenario 2) climatic variations. The results show all regions east of and including the Upper and Lower Mississippi Regions would tend to fill the existing reservoir storage in 1.2 years or less regardless of whether scenario 1 or 2 climatic variations occurred. In the west, the region most affected by either change would be the Lower Colorado River Region. Under the present climatic regime and total available storage, there is enough capacity to accommodate 12+ years of mean annual regional flow, including present level of inflow. If a warmer and drier (scenario 1) variation occurred it would require nearly 19 years reservoir capacity. In the Missouri River, the present total reservoir capacity would be quite beneficial as only a little less than two years of mean flow would be required to fill to total capacity should a cooler and wetter (scenario 2) change occur; presently a little less than three years is required. If a warmer and drier (scenario 1) change occurred, a little over eight years would be required. What are the present trends in climate? At this time, there appear to be different lines of evidence suggesting a present cooling trend over much of the Northern Hemisphere with at least one study suggesting it will continue. Some climatologists indicate that with increasing carbon-dioxide in the atmosphere, this will reverse and warming will be the dominant future trend. Analysis of individual regional runoff series do not show any indication of trends in runoff data suggesting a uniform increase in mean annual runoff. In fact, the opposite is true. In a rather restricted segment of the western southern Rocky Mountain Region, the trend is toward reduced runoff. When the overall total streamflow of the nation is considered however, there is no apparent trend in the data.