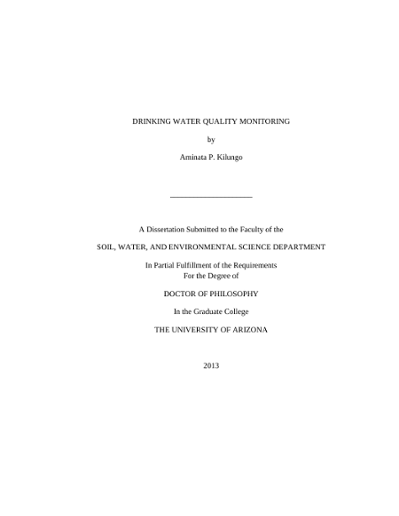 This dissertation involves two different studies. The first concerns the real-time detection of microbial contamination in drinking water using intrinsic fluorescence of the microorganisms. The prototype, “Blinky”, uses LEDs that emit light at 365nm, 590nm, and 635nm for ultraviolet, amber, and red light, respectively. At 365 nm, the cellular components excited include reduced pyridine nucleotides (RPNs), flavins, and cytochromes to distinguish viable bacteria; at 590 nm, the cellular components excited include cytochromes for non-viable bacteria; at 635 nm, the cellular components excited include calcium dipicolinic acid (DPA) for spores. By using these three different wavelengths, the prototype can differentiate between viable and non-viable organisms and also has the potential to detect spores. The aim of this study was to improve the detection limit by modifying the design of the instrument and to establish the detection limit of viable and non-viable bacteria and spores. The instrument was modified by replacing existing LEDs with LEDs that had 50% more intensity. Two additional LEDs were added for amber and red light, bringing the total to four LEDs for each. The LEDs were also positioned closer to the photomultiplier tube so as to increase sensitivity. For UV, only two LEDs were used as previous. The detection limit of the viable bacteria was ~50 live bacteria/L. No change in the intrinsic fluorescence below the concentration of ~10⁸ dead bacteria/L was observed. The results for spore measurements suggested that most of the spores had germinated before or during the measurements and could not be detected. The instrument was successful in detection of viable bacteria and also differentiating viable and non-viable bacteria. The instrument was not successful in detection of spores. The second study was designed to assess the water quality of well construction in southeastern Tanzania. Three designs were tested: Msabi rope pump (lined borehole and covered), an open well converted into a closed well (uncovered well into a covered and lined well), and an open well (uncovered and may or may not be lined). The study looked at the microbial and chemical water quality, as well as turbidity. The survey included 97 water collection points, 94 wells and three rivers. For microbial analysis, heterotrophic plate count (HPC), total coliforms and E. coli tests were performed. Fifteen of these wells were further analyzed for microflora and diversity for wells comparison purposes, using culture methods, followed by polymerase chain reaction (PCR) and genome sequencing. Ten wells out of the fifteen were analyzed for calcium (water hardiness), potassium, nitrates, nitrites, chloride, fluoride, bromide, sulfate, iron, and arsenic. Two water collection points were also selected for organic compound analysis (gasoline components). All samples tested positive for coliforms. Two samples tested positive for Escherichia coli for the lined borehole (Msabi rope pump) and four samples from closed wells. All open wells tested positive for E. coli. There was more microbial diversity in open wells than the closed wells and Msabi rope pumps. Potential bacterial pathogens were detected in seven wells out of the fifteen examined. The wells that tested positive were one Msabi rope pump, one closed well; the rest were from open water sources. Open wells had high turbidity followed by closed wells. Msabi rope pumps had low turbidity comparing to the two wells designs. No traces of gasoline components were detected in any of the water sources. One well out of ten had high amounts of nitrates-nitrogen (> 10 mg/L). The results of this study showed that the Msabi rope pumps performed comparably to the closed wells in terms of microbial quality but performed better with regard to turbidity. The open wells performed poorly in terms of microbial water quality as well and turbidity. There was a statistical difference in HPC, total coliforms, E.coli numbers and turbidity between open wells, closed wells and the Msabi rope pumps. However, there was no statistical difference in HPC, total coliforms and E.coli numbers between the closed wells and Msabi rope pumps. Msabi rope pumps performed better in turbidity