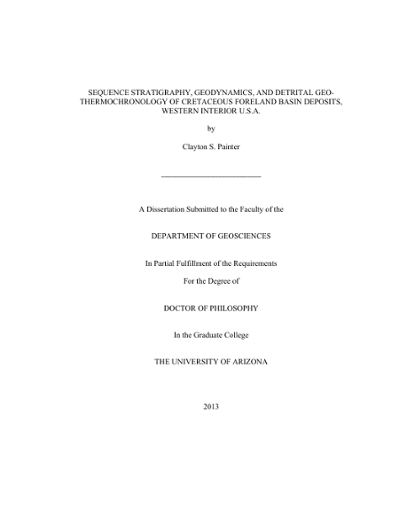 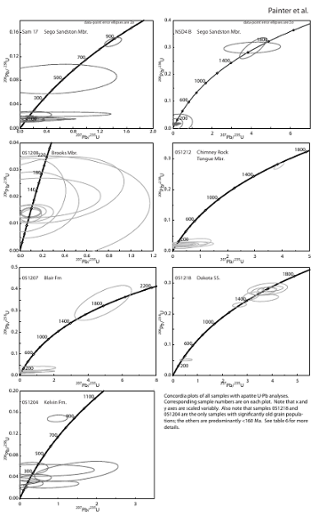 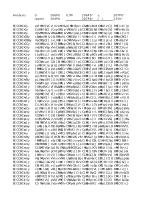 Three studies on Cordilleran foreland basin deposits in the western U.S.A. constitute this dissertation. These studies differ in scale, time and discipline. The first two studies include basin analysis, flexural modeling and detailed stratigraphic analysis of Upper Cretaceous depocenters and strata in the western U.S.A. The third study consists of detrital zircon U-Pb analysis (DZ U-Pb) and thermochronology, both zircon (U-Th)/He and apatite fission track (AFT), of Upper Jurassic to Upper Cretaceous foreland-basin conglomerates and sandstones. Five electronic supplementary files are a part of this dissertation and are available online; these include 3 raw data files (Appendix_A_raw_isopach_data.txt, Appendix_C_DZ_Data.xls, Appendix_C_UPb_apatite.xls), 1 oversized stratigraphic cross section (Appendix_B_figure_5.pdf), and 1 figure containing apatite U-Pb concordia plots (Appendix_C_Concordia.pdf). Appendix A. Subsidence in the retroarc foreland of the North American Cordillera in the western U.S.A. has been the focus of a great deal of research, and its transition from a flexural foreland basin, during the Late Jurassic and Early Cretaceous, to a dynamically subsided basin during the Late Cretaceous has been well documented. However, the exact timing of the flexural to dynamic transition is not well constrained, and the mechanism has been consistently debated. In order to address the timing, I produced new isopach maps from ~130 well log data points that cover much of Utah, Colorado, Wyoming and northern New Mexico, producing in the process, the most detailed isopach maps of the area. These isopach maps span the Turonian to mid-Campanian during the Late Cretaceous (~93–76 Ma). In conjunction with the isopach maps I flexurally modeled the Cordilleran foreland basin to identify when flexure can no longer account for the basin geometry and identified the flexural to dynamic transition to have occurred at 81 Ma. In addition, the dynamic subsidence at 81 Ma is compared to the position of the hypothesized Shatsky Oceanic Plateau and other proposed drivers of dynamic subsidence. I concluded that dynamic subsidence is likely caused by convection over the plunging nose of the Shatsky Oceanic Plateau. Appendix B. The second study is a detailed stratigraphic study of the Upper Cretaceous, (Campanian, ~76 Ma) Sego Sandstone Member of the Mesaverde Group in northwestern Colorado, an area where little research has been done on this formation. Its equivalent in the Book Cliffs area in eastern Utah has been rigorously documented and its distal progradation has been contrastingly interpreted as a result of active tectonism and shortening in the Cordilleran orogenic belt ~250 km to the west and to tectonic quiescence, flexural rebound in the thrust belt and reworking of proximal coarse grained deposits. I documented ~17 km of along depositional dip outcrops of the Sego Sandstone Member north of Rangely, Colorado. This documentation includes measured sections, paleocurrent analysis, a stratigraphic cross section, block diagrams outlining the evolution of environments of deposition through time, and paleogeographic maps correlating northwest Colorado with the Book Cliffs, Utah. The sequence stratigraphy of the Sego Sandstone Member in northwest Colorado is similar to that documented in the Book Cliffs area to the south-southwest, sharing three sequence boundaries. However, flood-tidal delta assemblages between fluvio-deltaic deposits that are present north of Rangely, Colorado are absent from the Book Cliffs area. These flood-tidal-delta assemblages are likely caused by a large scale avulsion event in the Rangely area that did not occur or was not preserved in the Book Cliffs area. In regards to tectonic models that explain distal progradation of the 76 Ma Sego Sandstone Member to be caused by tectonic quiescence and flexural rebound in the thrust belt, the first study shows that at 76 Ma, flexural processes were no longer dominant in the Cordilleran foreland, so it is inappropriate to apply models driven by flexure to the Sego Sandstone Member. Dynamic processes dominated the western U.S.A. during the Campanian, and flexural processes were subordinate. Appendix C. In order to test the tectonic vs. anti-tectonic basin-filling models for distal coarse foreland deposits mentioned above, the third study involves estimating lag times of Upper Jurassic to Upper Cretaceous conglomerates and sandstones in the Cordilleran foreland basin. Measuring lag time requires a good understanding of both the stratigraphic age of a deposit and the thermal history of sedimentary basin. To further constrain depositional age, I present twenty-two new detrital zircon U-Pb (DZ U-Pb) sample analyses, spanning Upper Jurassic to Upper Cretaceous stratigraphy in Utah, Colorado, Wyoming and South Dakota. Source exhumation ages can be measured using thermochronology. To identify a thermochronometer that measures source exhumation in the North America Cordillera, both zircon (U-Th)/He, on eleven samples, and apatite fission track (AFT) thermochronology, on eleven samples was performed. Typically, the youngest cooling age population in detrital thermochronologic analyses is considered to be a source exhumation signal; however, whether or not these apatites are exhumed apatites or derived from young magmatic and volcanic sources has been debated. To test this, I double dated the detrital AFT samples, targeting apatites with a young cooling age, using U-Pb thermochronology. Key findings are that the maximum depositional ages using DZ U-Pb match existing biostratigraphic and geochronologic age controls on basin stratigraphy. AFT is an effective thermochronometer for Lower to Upper Cretaceous foreland stratigraphy and indicates that source material was exhumed from >4–5 km depth in the Cordilleran orogenic belt between 118 and 66 Ma, and zircon (U-Th)/He suggests that it was exhumed from <8–9 km depth. Double dating apatites (with AFT and U-Pb) indicate that volcanic contamination is a significant issue; without having UPb dating of the same apatite grains, one cannot exclude the possibility that the youngest detrital AFT population is contaminated with significant amounts of volcanogenic apatite and does not represent source exhumation. AFT lag-times are 0 to 5 Myr with relatively steady-state to slightly increasing exhumation rates. We compare our data to orogenic wedge dynamics and subsidence histories; all data shows active shortening and rapid exhumation throughout the Cretaceous. Our lag-time measurements indicate exhumation rates of ~.9–>>1 km/Myr.