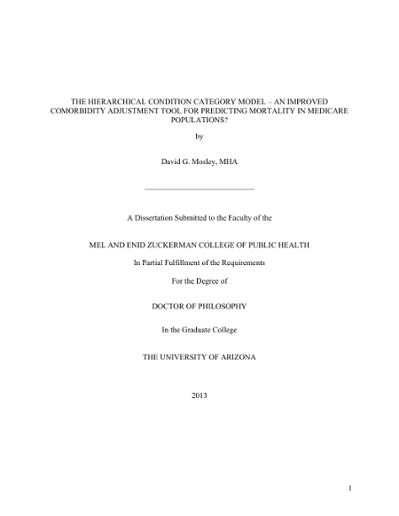 BACKGROUND: Morbidity, defined as disease history, is an important and well-known confounder in epidemiologic studies. Numerous methods have been developed over the last 30 years to measure morbidity via valid and reliable processes. OBJECTIVE: The goal of the current study was to evaluate, via comparative predictive validity assessment, the Centers for Medicaid and Medicare Studies Hierarchical Condition Category (CMS-HCC) comorbidity model for its ability to improve the prediction of 12-month all-cause mortality among a Medicare population compared to previously published comorbidity index models. There were three specific aims: (1) challenge the current state of risk adjustment among aged populations via an evaluation of the comparative predictive validity of one novel and four existing models to predict all-cause mortality within 12 months among a heterogeneous population of Medicare beneficiaries; (2) Investigate the comparative predictive validity of the five models to predict all-cause mortality within 12 months among two homogenous populations diagnosed with ischemic heart disease and selected cancers, including prostate cancer, lung cancer, colorectal cancer, breast cancer, pancreas cancer, and endometrial cancer; and (3) measure each comorbidity model's ability to control for a known example of confounding by indication. METHODS: A retrospective cohort design was used for all specific aims. Study 1 included 257,641 Medicare beneficiaries enrolled in three Medicare Advantage prescription drug health plans in Alabama, Florida, or Ohio in 2010 and 2011. Study 2 limited analysis to 14,260 and 66,440 beneficiaries with administrative evidence of selected cancers or ischemic heart disease in 2010, respectively. Study 3 limited analysis to the beneficiaries with ischemic heart disease. For each participant, comorbidity risk scores for the following five models were generated using administrative data from 2010: an age/sex model, the Romano adaption of the Charlson Comorbidity Index (CCI) model, the Putnam adaptation of the Chronic Disease Score Model (CDS), the CMS version of the Hierarchical Condition Category (CMS-HCC) model, and the Agency for Healthcare Research and Quality (AHRQ) adaptation of the Elixhauser model. The prospective predictive validity of the models to predict all-cause mortality during 2011 was compared via the c statistic test. Participants with ischemic heart disease were randomly allocated retrospectively to either 1) a group that had "received" a hypothetical "Drug A" in 2010 or 2) a group that had "received" a hypothetical "Drug B" in 2010. In order to evaluate the impact of confounding by indication, a weighting factor was applied to the randomization process in order to force the 33,220 participants randomized to "Drug A" to have a 2.736 times higher likelihood of having at least one acute inpatient hospitalization in 2010. Each comorbidity model's ability to control for the contrived confounding by indication was evaluated via relative risk of death. RESULTS: The CMS-HCC model had statistically significant higher c-statistic values than all four existing comorbidity indices among the heterogeneous Medicare Advantage population (N=257,641) and the homogeneous populations with breast cancer (N=4,160) and prostate cancer (N=6,594). The CMS-HCC model displayed similar performance for lung cancer (N=1,384), colorectal cancer (N=1,738), endometrial cancer (N=232), and ischemic heart disease (N=66,640) and statistically significant lower performance for pancreas cancer (N=152). The log-transformed CMS-HCC model was the only model to generate a non-significant association between exposure to "Drug A" and subsequent mortality. CONCLUSION: In general, the CMS-HCC model is the preferred comorbidity measure due to its predictive performance. However, other comorbidity models may be optimal for diseases with low prevalence and/or high mortality. Researchers should carefully and thoughtfully select a comorbidity model to assess the existence and direction of confounding. The CMS-HCC model should be log-transformed when used as a dependent variable since the score is a ratio level measurement that displays a normal distribution when log transformed. The resulting score is less likely to violate the assumptions (i.e. violations of normality) of common statistical models due to extreme values. The national availability of CMS-HCC scores for all Medicare beneficiaries provides researchers with access to a new tool to measure co-morbidity among older Americans using an empirically weighted, single score. In terms of policy, it is recommended that CMS produce CMS-HCC scores for all Medicare beneficiaries on a rolling 12 month basis for each month during the year. The availability of monthly scores would increase the ease of use of the score, as well as help facilitate more rapid adoption of the tool.