Protestants in Palestine: Reformation of Holy Land Pilgrimage in the Sixteenth and Seventeenth Centuries 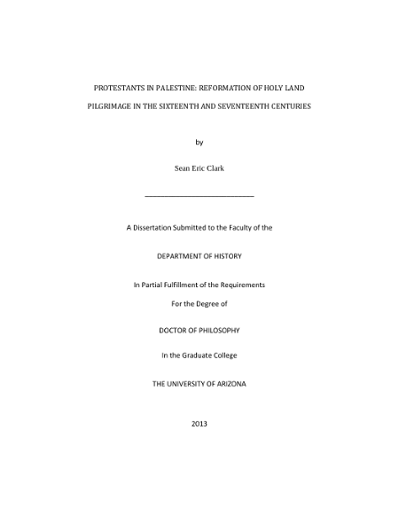 The historiography on western European Holy Land pilgrimage effectively ends with the fifteenth century, giving the inaccurate impression that early modern western Christians either did not visit Jerusalem or, if they did, they were not true pilgrims. Though pilgrim numbers certainly declined in the sixteenth and seventeenth centuries from their medieval heights, both Catholic and, much more surprisingly, Protestant pilgrims continued to make religiously motivated journeys to Jerusalem. Some even publishing pilgrimage narratives on their return. Twenty-five pilgrimage narratives, over half by Protestant authors and published in Protestant territories, were written between the mid-sixteenth and mid-seventeenth centuries. These largely unexplored sources underscore the complexities of confessional identity in the century and a half following the start of the Reformation. Without exception, the reformers condemned pilgrimage as part of an illegitimate theology of works righteousness. Using both historical and anthropological methodologies, this dissertation addresses the question of how Protestant pilgrims dealt with the apparent conflict between religious doctrine and personal action. It concludes that in the face of such attacks, Protestant pilgrim-authors, mostly Lutherans, attempted to redeem Holy Land pilgrimage by recasting the practice so as to neutralize criticisms and reinforce Lutheran doctrine. The dissertation's first part, comprising a chapter of background on medieval pilgrimage and a second analyzing the expressed motivations for Protestant pilgrimage, examines the ways Lutheran pilgrim-authors justified both traveling to Jerusalem and publishing descriptions of that travel. It argues that Protestant authors believed Holy Land pilgrimage and Holy Land pilgrimage narratives could lead to greater understanding and appreciation of Scripture, and thus to greater faith. The second part of the dissertation consists of three chapters. Chapter three deals with the place of Jerusalem in medieval and early modern Christianity, paying particular attention to the Ottoman Jerusalem of the sixteenth and seventeenth centuries, the Jerusalem encountered by these pilgrim-authors. The next two chapters (four and five) in turn examine the way the Protestant pilgrim-authors describe their encounter with the land and people of Palestine. For many Protestant pilgrims, the desiccated landscape of Palestine, what they saw as its ruined state, was a warning for their readers about God's righteous anger at human sinfulness. Again, the authors emphasize Biblical literacy. Protestant authors constantly read the landscape around them through the Bible, and read the Bible through the landscape. The final chapter explores the descriptions of other Christians residing in the early modern Holy Land, specifically the Franciscans and varied sects of Eastern Christianity. Much scholarly attention has been, for good reason, lavished on the relationship between Christianity and Islam, how Muslims were used as a mirror for creating European Christian identity. In their discussion of other Christians, however, Protestant pilgrims are able to produce a more finely detailed picture of their own particular religious identity. By bouncing their ideas of themselves off their image of other Christians, they come to a clearer understanding of what being a Christian meant for them. In the end, pilgrimage Jerusalem, was part of the larger debate about Christian identity and legitimacy.